Skip to content
Trusted By Millions
Independent, Expert Android News You Can Trust, Since 2010
Publishing More Android Than Anyone Else
29
Today
29
This Week
29
This Month
4652
This Year
114679
All Time The Sony Xperia Z1 was just announced at the beginning of this month. There was another smartphone rumored to be unveiled alongside it that did not materialize. The Sony “Itsuki” was rumored to basically be the Xperia Z1 with a smaller screen. It did not show up at IFA in Berlin earlier this month, but now it looks like it’s going to see the light of day.

A spec sheet from Japanese wireless carrier NTT Docomo has been spied by XperiaBlog showing the Sony Xperia Z1 f listed beside the Xperia Z1. There’s a full spec listing and device renders giving us a size comparison. The Z1 f is going to come in 4 colors. There will be the standard white and black models, along with pink and lime green versions. The Xperia Z1 f has the same camera 20.7 megapixel Exmor RS camera as the Z1. The display is smaller, at 4.3-inches with a 720p screen resolution. It will be powered by a 2.2 GHz Snapdragon 800 CPU, 2 GB of RAM, and come with 16 GB of internal storage. The spec sheet lists the battery at 2300 mAh, and it will also be IP58 water- and dust-resistant just like the Xperia Z1. 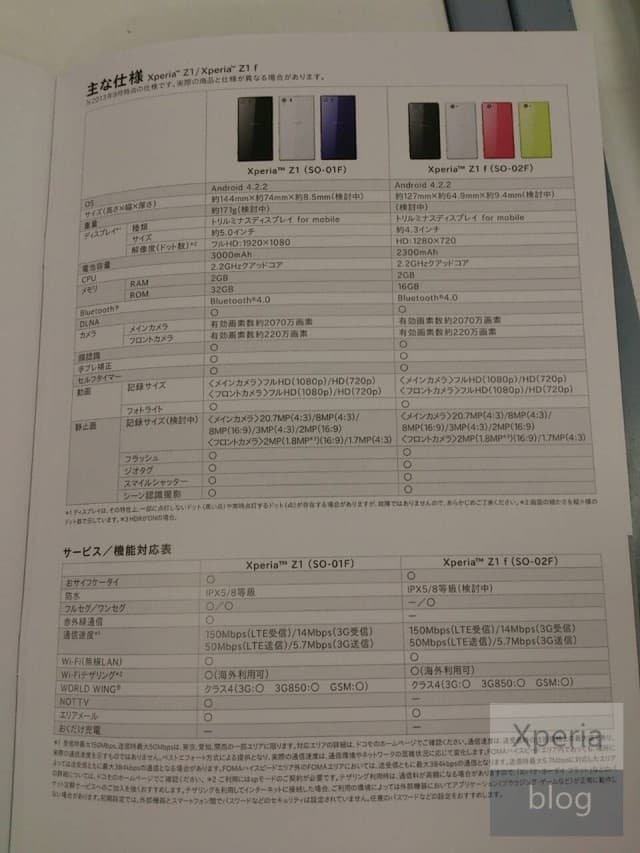 These specs all fit with earlier rumors about the “Xperia Z1 mini.” The Z1f is simply a smaller version of the Z1, with pretty much the same specs. This is a trend that I hope continues. We’ve seen recent “mini” smartphones like the HTC One Mini and Galaxy S4 Mini get slight spec downgrades to go with their smaller screens. Sony is one manufacturer that seems to understand the market for smaller devices with powerful specs. Whether it’s due to smaller hand size or the desire for increased pocket-ability, there are plenty of people that want high-end specs but don’t want to carry a device that borders on tablet screen-size.

We’ve only seen the Xperia Z1 f listed for Japan at this point. Hopefully Sony makes it available for the global market. Unfortunately it’s probably not going to be sold by any U.S. wireless carriers. We would love for that to happen, but if you want a Sony smartphone right now you’re not going to find it at your local AT&T or Verizon store.