Always at the forefront of the cutting edge, Samsung looks set to become the first out of the gate when it comes to having a device with a flexible display on the market.  While many of Samsung’s cutting edge features are considered gimmicky by many people out there, they are banking on the idea of a flexible display bringing something revolutionary to the table.  We’ve been hearing reports of flexible displays coming to production phones since Samsung showed off its YOUM flexible display technology in 2012, but nothing has been solid up until now.  According to Reuters, Samsung will be introducing a smartphone with a curved display this October.  D.J. Lee, who is Samsung’s mobile business head of strategic marketing, announced this fact at the Galaxy Note 3 launch in Seoul today, and it brings almost more questions to light than what it answers. 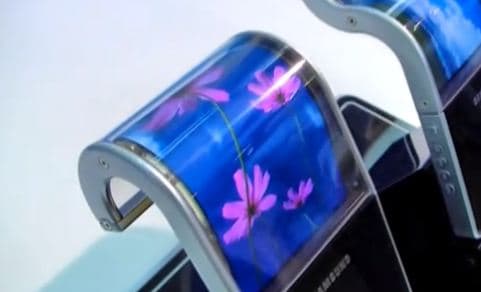 Other possibilities for this new technology are in the recently rumored Galaxy F lineup of “super-premium” smartphones.  One can pretty easily surmise that Galaxy F stands for Flexible Display, and would make it easily stand out as a super premium model if for no other reason than that the flexible display technology can’t be made nearly as quickly or efficiently as regular displays, leading to a higher cost.  Then of course there’s also the fact that flexible displays are supposed to be unbreakable; a feature that would have any smartphone enthusiast giddy with excitement, much less your usual premium-product-purchasing consumer.  Don’t forget about that patent that Samsung was given back in May of this year that shows a tablet folding in two, either becoming a briefcase with a handle in tow, or to use it as a keyboard while the tablet stands on its own.  Yes there’s lots of amazing, incredibly awesome possibilities with flexible displays, and it looks like we’ll have less than a month to find out just what Samsung has been cooking up!