As with most things in life, once something proves popular, it seems that everyone wants to join in and Samsung have certainly not been a company willing to be left out. When the first leaks of the iPhone 5S started to hit the Internet, the gold version of the device was certainly something people were skeptical about. However, Apple went ahead and did just that; announce a gold version of the iPhone 5S. Of course, it’s not for everyone but, Samsung might well just be about to release their own flagship coated in gold. Figuratively, of course. 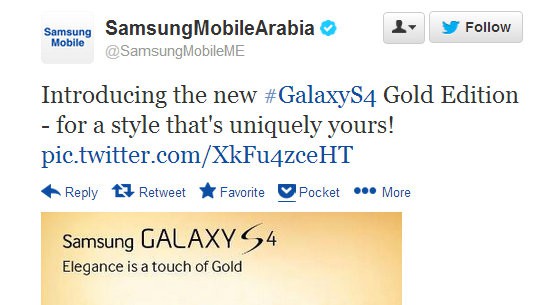 A recent tweet from Samsung Mobile Arabia suggests that Samsung is about to launch a golden Galaxy S4. Of course, when that is is unclear. While the idea of Samsung releasing a gold version of their flagship soon after released the iPhone 5S in gold sounds a little fishy, this is probably a more regional affair. Just like the pink versions of the Galaxy S and the Galaxy Note do very well in South Korea, we have a feeling that a gold version of will sell very well in the Middle East, exactly where this phone is heading.

There’s a chance that the Middle East account for Samsung has been hacked and that this is a total fake but, we’d like to think that Samsung has their security under control when it comes to social media.

This wouldn’t be the first time that we see Samsung deliver crazy color versions of their flagship smartphone. Last year’s Galaxy S III came in colors such as Garnet Red and Emerald Green. The real question is whether or not such a version would sell well. What do you think? Let us know in the comments whether or not you’d buy a Galaxy S4 in gold or if you know someone that would.