The arms race in mobile processors is heating up once again, this time thanks to Apple.  ARM might have announced their 64-bit processor line back in October 2012, but since those products weren’t scheduled to come out until 2014 or even 2015, it seems that Apple found a way to sneak themselves into the game ahead of everyone else.  When they launched the iPhone 5S with its new 64-bit architecture this past week, they upped the game in terms of what is expected from a mobile processor.  Even if the public doesn’t know what 64-bit means or what it does, it’s strangely a spec that seems to have grabbed the attention of the public more than quad or octa-core processors have in the past 2 years since Android phones started packing those.  We found out recently that Android 4.4 Kit Kat will be the first version of Android to officially support the 64-bit platform, and it looks like everyone from AMD to Samsung will be taking advantage of this very soon.  While Google announced official 64-bit support for Android back in February this year, it went largely unnoticed thanks to their complete inability to communicate to the public.  Samsung, however, has a much better grasp on how to talk to the public, and it’s going fully public with its new lineup of 64-bit processors based on the new ARMv8 architecture. 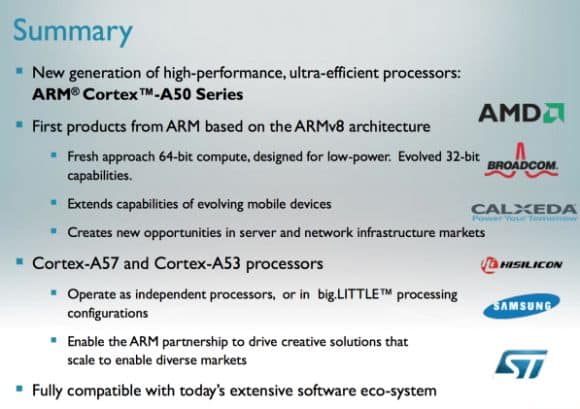 Samsung may have just updated their Exynos lineup with the Exynos 5420, a true octa-core processor that powers the non-LTE version of the Galaxy Note 3, but the next update is right around the corner.  SamMobile is reporting information from a Korean daum.net article pertaining to Samsung’s next update to its Exynos lineup to bring it up to the 64-bit standard set by ARM.  Traditionally 64-bit processor updates have been to allow more RAM, as a 32-bit standard only allows for 4GB of RAM to be used, while a 64-bit environment allows for 16 Exabytes of RAM to be used.  While 16 Exabytes is an absurd number, it effectively gives us an unlimited amount of RAM to work with in the future, eliminating the need for another upgrade of this caliber for quite some time.  64-bit also brings improved performance when optimized correctly, as Anandtech has shown in their review of the iPhone 5S when comparing the 64-bit build of the same benchmark as the 32-bit one.  ARM’s Cortex-A57 and A53 chips will bring a new generation of octa-core chipsets to the market soon.  Samsung is stating that they are nearly done with the new chipsets, and will bring 64-bit to the Android market likely starting with the Galaxy S5 next spring.  If you aren’t familiar with how the new octa-core chipsets from Samsung work, check out their simple minute-long explanation.