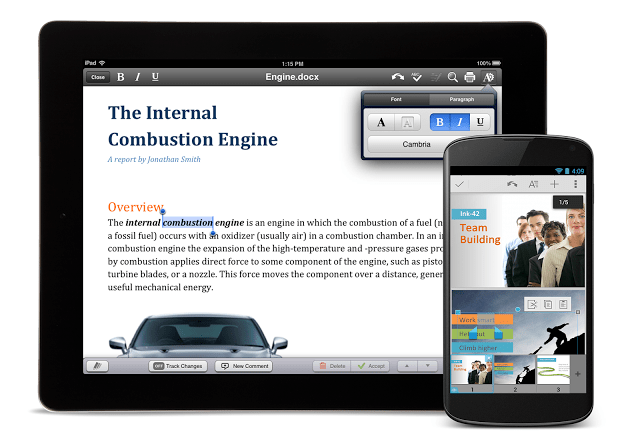 Google bought QuickOffice, one of the most popular mobile Office app on Android and other platforms, about a year ago, and since then we haven't heard much about it. QuickOffice used to be a paid app, but starting from today, Google is making QuickOffice a free app for both Android and iOS. If you sign-in with your Google account before September 26, after you download the app, you get an extra 10 GB of storage for your Google Drive account (presumably forever). You won't see the extra storage for a few weeks, though.

Now that Microsoft is is giving away Office for free with their Surface RT tablets, and Apple has also made iWorks free for iOS7, I expect Google to become a lot more aggressive with QuickOffice on Android. Giving it away for free is a good start, but they may even need to integrate it with Android 4.4 or Android 5.0, to really get people to use it, the way they've done with Hangouts, which replaced Google Talk.

Google Drive also seems to be integrated fully into this new QuickOffice app, and it's also one of the apps that should probably come integrated with Android, considering both Apple and Microsoft have started integrating their cloud storage apps with their operating systems, too. So I don't see why Google would get into any trouble if they did the same with both Google Drive and QuickOffice.

Google is already using some of the QuickOffice doc conversion technology to help users of Chrome read and edit documents directly in Chrome, with no need for a Google Drive account, although I don't think this has been enabled by default yet, but I'm sure it's coming very soon, too.

As Google starts becoming a more mature all-around consumer company, and also a bigger enterprise company, good support for Office documents is going to be required. This latest version of QuickOffice is only the beginning, and something tells me we'll see a lot more from Google in this space.