If you’re an avid reader of AndroidHeadlines.com, you would have likely heard of the HTC One Max at least a few times in the past. HTC’s new 5.9 inch “phablet” is likely one of the worst kept secrets in the Android community and has been spotted in several leaked images over the past month.

HTC is well known for creating special variants of their flagship phones for the Chinese market as they have done with the HTC One and even the HTC One X/S. HTC’s Chinese variants closely mimic their global line of GSM phones however normally have less internal storage, a MicroSD card slot added, dual SIM card slots and a modified radio to allow it to connect to China’s LTE (like) network. The Chinese version is normally slightly thicker and the back panel can be removed to expose the MicroSD and SIM card trays. 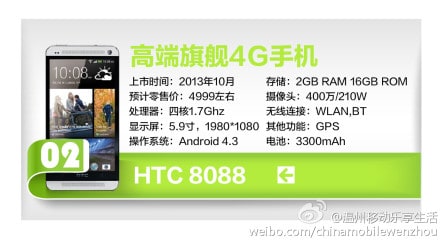 While we do take every leak with a grain of salt, the specifications in this image closely match what we have reported on before with the exception of the Processor. The Chinese version of the HTC One Max seems to have the name “HTC 8088” is rumored to contain;

Please keep in mind that if these specifications are indeed true, they would only be for the Chinese market. Previous leaks have shown a Snapdragon 800 SoC clocked at 2.3 GHz, we are unsure why this is showing a 1.7 GHz processor. It is possible that the US and Global versions may contain a small number of internal hardware changes.

The phone is expected to sell for 4900¥ or roughly $800 USD. The leaked image points to a possible October release date.