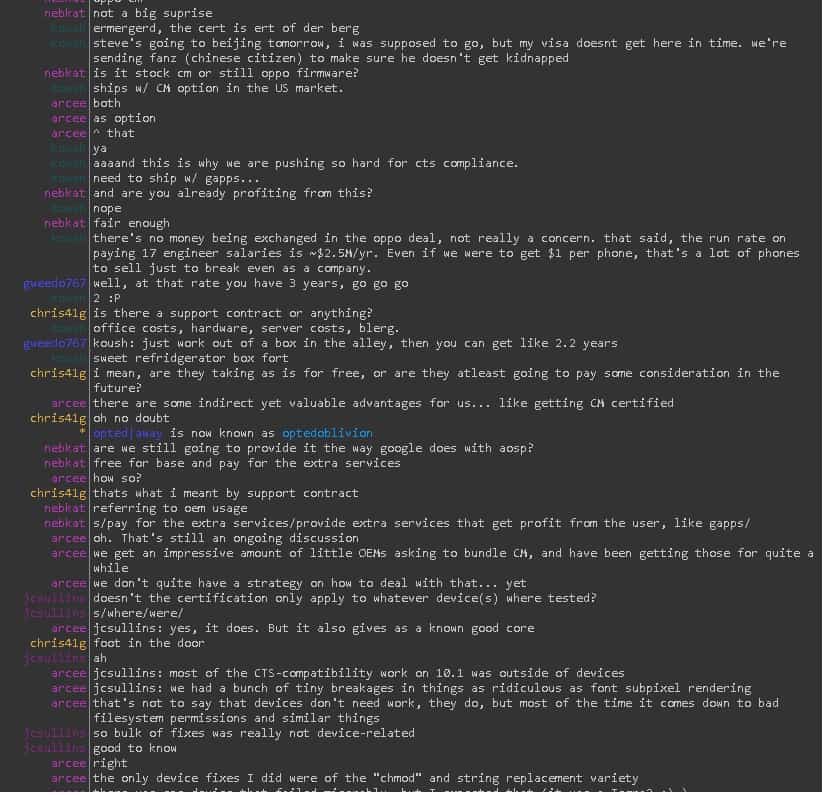 This morning, some stuff has been breaking regarding Cyanogen Inc., and OPPO. First OPPO posted a trailer teasing their N1, which had the founder of Cyanogen, Steve Kondik in there. Now, one of my buddies over on Google+ has shared a leaked screenshot of their chat within CyanogenMod.

What this screenshot tells us is that Steve Kondik is heading to Beijing tomorrow, probably to have a meeting with OPPO about the deal. IT also tells us that there is no money involved in this deal. We can also see that when you boot up the N1, you'll be able to choose CyanogenMod or OPPO's skin. Which is a pretty nice skin. This is definitely getting exciting. I have to say, when Cyanogen announced this week that they had a hardware partner that would be announced soon. My first thought was OPPO. I was also not the only one that called it.

Things are getting real interesting over at OPPO and CyanogenMod. OPPO has always been one of the most developer-friendly OEMs around. Heck, they sent a Find 5 to both CyanogenMod and Paranoid Android and promote the fact that the Find 5 can run those two ROMs on their site. But here's the kicker, on the Find 5, you can flash ROMs without rooting your device. Now isn't that some awesomeness?

We're learning more about the OPPO/CM deal, and we'll be sure to post the details as they become available. But October is looking to be a pretty busy month. Between the Nexus 5 from Google and possibly the OPPO N1 from CyanogenMod. It's going to be a tough choice for Android purists out there, like myself.

Make sure you stay tuned to Android Headlines for all the information. How many of you saw this coming, a deal between OPPO and CyanogenMod? Let us know in the comments below.