Nokia has been having a lot of fun lately; first with their punch at Samsung/KITKAT and now with their latest jab at Apple’s newly announced iPhone 5C and Gold colored iPhone 5S.

Apple announced their new “Budget” iPhone 5C (holds for laughter) a  few hours ago and along with the polycarbonate body, it was announced that the new phone will launch in several colors. Nokia quickly took to their Google Plus and Twitter feeds to Thank Apple for their new design choices. Aside from the same polycarbonate housing, Nokia’s Lumia phones are also known for being available in a massive selection of colors. “Imitation is the best form of flattery” seems quite fitting in this case. 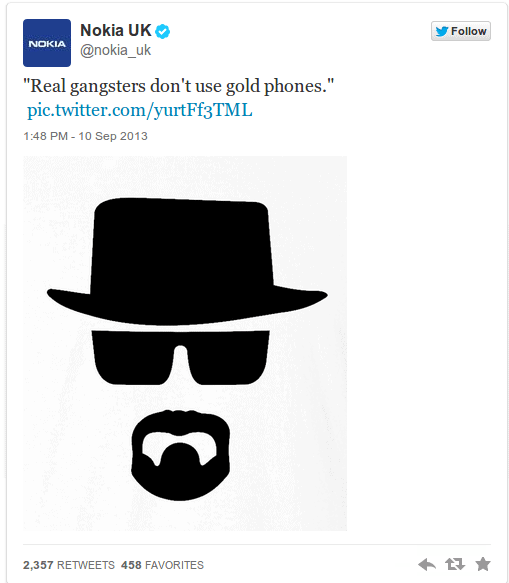 To add further insult to injury, Nokia took another cheap shot at the Gold iPhone 5S with the saying “Real gangsters don’t use gold phones”. I guess nothing is off-limits to Nokia lately and I am shocked they did not make a fingerprint reader joke.

I am not sure what has gotten into Nokia lately as they have also taken the time to poke fun at Samsung/KitKat shortly after the announcement was made last week by showing a Samsung Galaxy S4 snapped in half. Their image was poking fun of Samsung’s perceived poor build quality.

These latest smear campaigns from Nokia are clearly an attempt to try to siphon off market share from other providers. It is no secret that Microsoft’s phone platform is struggling to gain market share and is clearly hurting Nokia’s sales figures. I guess their sales team has a lot of free time on their hands lately. Last I checked, stores are having issues giving away their phones for free.

Is this simply just harmless fun or the obvious showing of resentment? Tell us what you think in the comments below.