Thomas Henrik Zilliacus is a globally recognized visionary, innovator and leader in the mobile business space. Mr. Zilliacus took the deal between Microsoft and Nokia quite personally; you can read more about Microsoft Acquiring Nokia's Devices and Services for $5 Billion Euros here. He saw the deal as a natural end to a sad story for Nokia but believes this opens up an opportunity to right some wrongs. Demand for an Android-powered Nokia smartphone has gone unanswered by CEO Stephen Elop.

Mr. Zilliacus used his holding company, Mobile FutureWorks Inc., to fund and set up a new company called Newkia. The company charter is simple; continue the legacy of building superb Nokia handsets powered by Android. Because many in Nokia did not share the same enthusiasm that the Board of Directors had for the Microsoft deal, former Nokia executives have joined the firm. Newkia has a golden opportunity to ride Nokia brand recognition and offer the masses a smartphone of their dreams.

From concept to reality, the Lumia Nexus is the type of smartphone Newkia dreams of building in the near future. To do so, Newkia is setting their sites on attracting talent from Nokia to infuse Nokia DNA in their own up-and-coming smartphones. Newkia, founded in Singapore, aims to capitalize on emerging markets to further fuel expansion. But enough about the company, let's talk potential hardware offerings.

The Lumia Nexus is a concept design by Milanno Artworks. Beyond Photoshop, the Lumia Nexus features a 5 inch LCD3 display, a 2 GHz Quad-Core processor with 2 GB of RAM and 32 GB of internal storage. The other assumption is that the Lumia Nexus would bring the 41 megapixel PureView to Android would be an amazing feat but not likely. HTC, High-Tech Computer Corp., is surprisingly on the B-list for foundries which forced the firm to delay the HTC One in several markets. I believe Mr. Zilliacus has enough sense to develop a mid-tier product that is easier to mass produce. This would make the most of a B-list status, assuming the mobile upstart even gets that. I believe the first Newkia smartphone will be more along the lines of a Moto X, an elegant handset making the most of a pure Google experience. 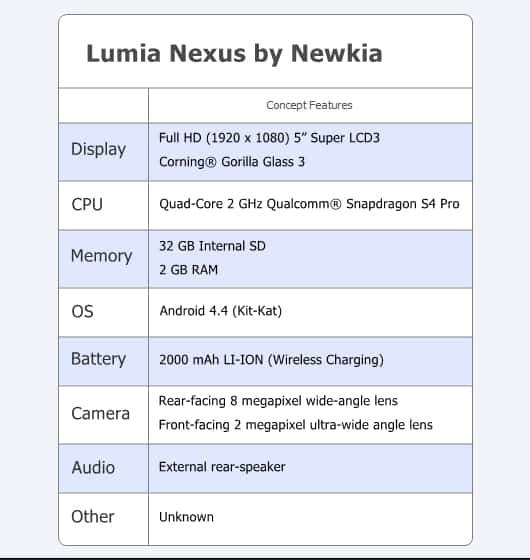