We've got some interesting news today from our favorite leaker, @evleaks. It seems that the Nexus 5 device that we thought passed through the FCC last week, the D820 and D821, is not a Nexus device. In fact, it's just another LG G2 variant, in fact it's a CDMA variant. From what I can tell, it looks to be the Sprint version of the G2. Since it did not support Verizon's bands, but did support Sprint's. Which also means that Sprint's G2 would have global capabilities. So you could use the device overseas. Which is always a great thing to have.

@Evleaks also tweeted a picture of the LG D821 next to the D802, which is the international G2. The picture is shown down below. 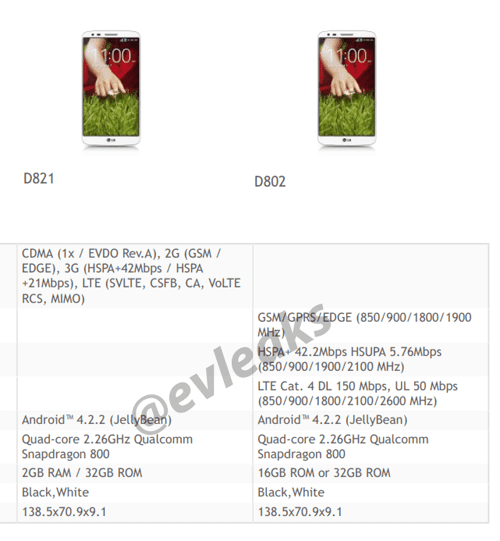 The D821 seems to match the dimensions of the G2 almost exactly. It's a bit thicker, but that's probably due to the LTE radio. However the D820 dimensions are a bit smaller. About 7 x 2 mm smaller. We don't know the thickness or thinness yet though.

There's been a ton of leaks surfacing for the Nexus 5 in the past week or so. I'm sure we'll see an entirely new spec sheet and a new device hitting the FCC that we might think is the Nexus 5. However, Motorola has been rumored to be creating a Nexus device and that it won't be the Moto X. So we'll have to keep our eye out to see what happens over the next month or so.

How many of you are sad to see that the Nexus 5 won't have CDMA capabilities, or at least not that we know of yet? Let us know in the comments below.