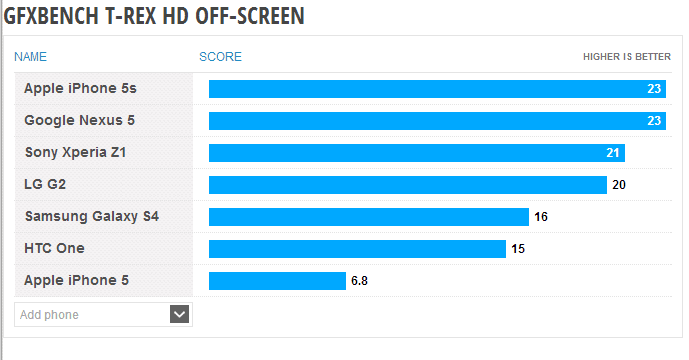 The Nexus 5 is LG and Google's worst kept secret right now. We've seen a lot of leaks and rumors of the Nexus 5 which we expect Google to announce next month with Android 4.4 KitKat. The Nexus 5 was even left in a bar, whether it was intentional or not. We all have theories about that, but we'll save those for another post. So far we know a lot about the Nexus 5, or at least we think we do. The Nexus 5 is stated to have a 4.96-inch 1080p display with a Snapdragon 800 processor.

The Nexus 5 appeared on GFXBench's website, and the device scored pretty good on two game simulation tests. We didn't yet have the on-screen results, but off-screen testing shows that the Nexus 5 is likely featuring the powerful Adreno 330 GPU. This also puts the device on par with the iPhone 5S at a score of 23. And it puts it above the Xperia Z1 at 21 and the LG G2 at 20. Which it's pretty cool to see it surpass the LG G2, since that's the device we believe the Nexus 5 is modelled after.

The T-Rex 2.7 test is a very graphical intensive benchmark which is designed to show off maximum workload that games will put on mobile devices. The Adreno 330 shows that it is definitely a great competitor to the GPU on the iPhone 5S which launched last week. Both GPUs support the Open GL ES 3.0. The Arm Mali-T6xx series of chips is the only family supporting the technology right now as well.

Remember that these benchmarks are with non-final software on an unreleased device. So chances are the scores will go even higher once the Nexus 5 and Android 4.4 KitKat are announced and are official. But it's going to be cool to see what kind of benchmark scores we see on the Nexus 5 come next month.

How many of you are excited about the Nexus 5?