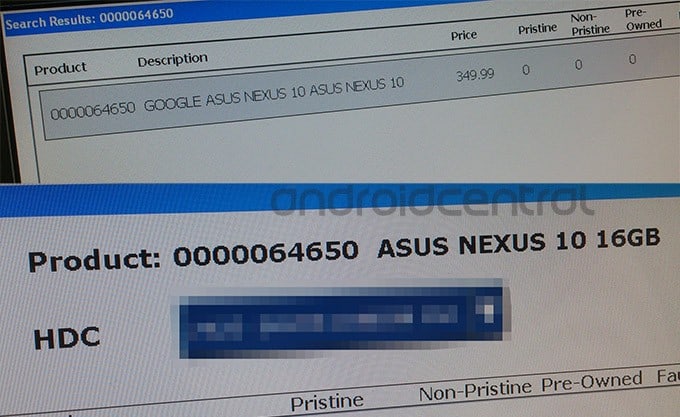 Considering Samsung has been a Nexus partner for Google for the past 3 years (first 2 for the Nexus S and Galaxy Nexus, and last year for the Nexus 10), it was to be expected that the partnership would end soon, so the question was who was going to take their place in making the new Nexus 10 tablet?

We've recently heard that it might be ASUS, the same OEM that made the Nexus 7 for the past 2 years. After seeing how good the Nexus 7 looked, and seeing it has such a high-quality display, I was actually hoping it would be ASUS the one to make the Nexus 10, too. It seems I may have gotten my wish, because as Android Central is reporting it looks like the previous rumor that it's ASUS the one who will make the next-gen Nexus 10 is true.

The new evidence comes from a tweet from an employee who showed the name of the tablet in a UK store, with a price tag of £349.99, which means me to believe it will be $400 in US, for the 16GB version, just like the previous Nexus 10 (which is a little cheaper right now, since it's so old).

We're going into 4 years now, and these manufacturers (including Apple) are trying to tell us that they still can't sell 32 GB as the default, and that they need to charge us an extra $100 for the extra 16 GB of storage? I find that really hard to believe. Price of tech drops in half every 2 years (for the same amount/performance), and we should be seeing both phones and tablets starting with 32 GB of storage from now on. They're already really stretching it this year, but next year they will have absolutely no excuse not to do it, and we should be calling them out on it with every chance we get (especially if they maintain the prices as high as the previous year).

The new Asus Nexus 10 should arrive at the same time with Nexus 5 and Android 4.4. KitKat on board, on October 14 (according to latest rumors).