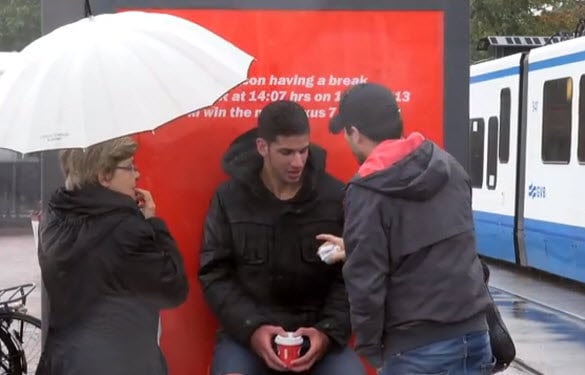 This whole KitKat thing really threw me for a loop – I'm still shaken up about it!  I was all prepared for my FAVORITE dessert, Key Lime Pie and we even had our acronym all picked out, KLP, and everything was as it should be.  Then, in what had to be one of the best kept secrets of 2013, Google throws us a KitKit 4.4 for our next operating system.  Don't get me wrong, I like KitKat as much as the next guy, but I was already for some Key Lime Pie…you know how you get hungry for something and then find out the restaurant ran out and you have to order something else and you're never really satisfied.  Let's just hope that this KitKat 4.4 satisfies our appetite. 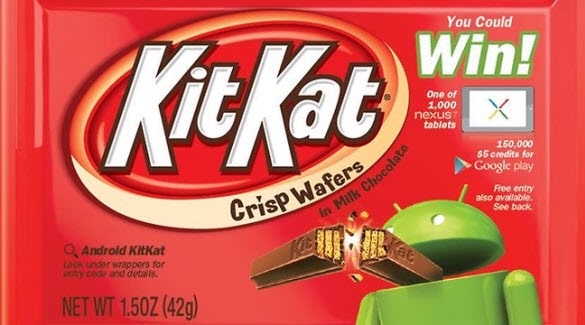 We found out there was a gag order on everybody not to leak a word from both Google and Nestle about their "secret" agreement.  We were told that only a few people at Google knew about it and the Nestle team is from Switzerland, and we all know the Swiss can keep a secret, after all, they had to produce all of this candy with special wrappers weeks before the announcement.   We were all waiting for Google to announce dessert, but instead, they gave us a treat, as well as a contest with the KitKat wrappers. 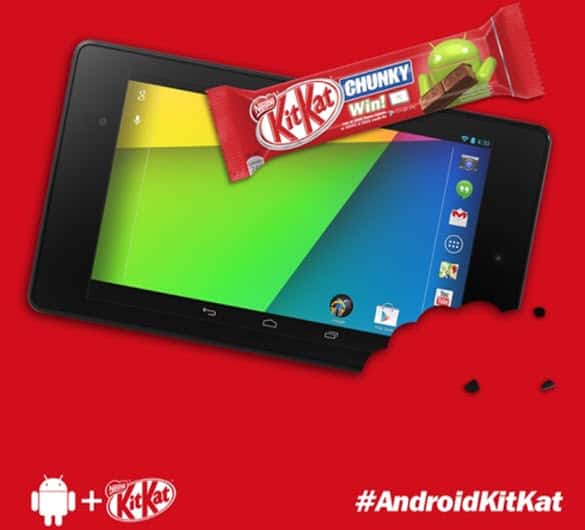 Rumors are, that the KitKat 4.4 will make it's debut this October on the new Nexus 5 smartphone, which is rumored to be based on the new LG G2 flagship phone (so many rumors).  To help promote the KitKat 4.4, Nestle took part in a promotional campaign by taking a bite out of the Nexus 7 tablet (above) by giving away some of them (the tablets) FREE if you were sitting at a certain spot, at a certain time, on a certain day!

Take a look at the video below and see how they set up the stands, watch the people stop and read the message, and then finally taking a seat and staying put, even through the rain, all in the name of a free Nexus 7.  You can share in their surprise and relief that they actually got the tablet!  As for what will be in KitKat 4.4, Google is keeping a tight wrapper on that as well!