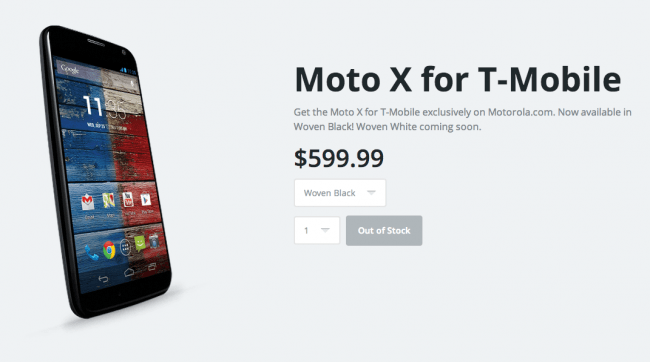 We've known for a while that there would be a T-Mobile compatible Moto X and that T-Mobile wouldn't directly be selling it. So we knew it would be available from Motorola's website for probably full price. On Monday, Motorola made that a reality and launched the Moto X for T-Mobile on their site. This means that the Moto X is now available on all the major US carriers AT&T, Sprint, Verizon, US Cellular and now indirectly, T-Mobile.

Right now the T-Mobile Moto X is listed as out of stock for both the Black and white models. So perhaps we might see some of their payment plans or the old classic plans available if people don't want to pay full price for the MotoX . Which is plausible, but be warned that's just my own speculation.

So far there's still no word on the North American developer editions which we were told would be coming soon. We're hoping Motorola hasn't forgotten about them and still plan to bring the Developer Edition. We had also heard, through an internal screenshot that the T-Mobile version would be sold on Google Play. So either that changed, or there might be another model for T-Mobile coming to Google Play. We'll have to keep our eyes open and see how this all unfolds.

Additionally, today Motorola began to step up their "marketing blitz" for the Moto X. They've launched a new campaign about Lazy phones. It's actually a pretty funny ad. Especially the end. You'll definitely want to watch this one. The video is down below.

How many of our readers on T-Mobile are less tempted to grab a Moto X now that it'll cost you $600? That's about the same price as the Galaxy S4 at full price. How many of you are going to hold out and wait for the Galaxy Note 3, or the LG G2 and see how great those devices are with their Snapdragon 800 processors? Let us know your thoughts in the comments down below.