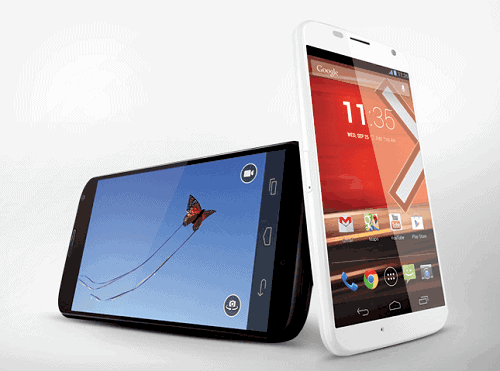 Motorola's newest flagship, the Moto X, will be available on all major carriers, as promised, and as such it will be Sprint's turn to receive it tomorrow for $199 on contract. There is, however, a limited time promotion which allows new subscribers to get the device for $100 less with instant credit. Sprint will offer it in woven black and woven white in the beginning, just like all the other carriers except AT&T, although they're promising to have the Moto Maker available for their network "in the coming months".

The Moto X has been a very controversial device, because it doesn't come with the latest and the greatest specs available today, even though it benchmarks very competitively. I don't think we should completely ignore the specs, because some of them can be very important for the experience of using the device, while others aren't so important anymore.

We're definitely starting to see diminishing returns in processing power improvements, because adding faster processors just doesn't seem to have a big effect on the experience anymore. However, there are other type of specs that can impact the experience, such as 24 bit audio support, which we're starting to see in some phones now, 802.11ac Wi-Fi for stronger signals and faster speeds, better screens (although we're getting close to perfection there, too), better build materials, and finally an area that I think should be of interest to OEM's for at least the next few years – cameras.

So I don't think the "whole" of the spec war is over yet, and it may never be truly over, it's just that I don't think the spec war of the next few years will be (or should be) about the same things it has been up until now, and as always, the experience of using the phone and that particular spec, will trump how good it appears to be on paper. That's why the Moto X makes for a very decent phone today, even if it doesn't appear to be, on paper, especially when there's so little competition in terms of customization.