When you’re comparing it with the iPad Mini, the LG G Pad comes out on top. It has the larger screen real estate, even though it’s even slightly less wide than the iPad Mini, it has a much bigger resolution than the current one, more RAM, and better processor. But you can also compare it with the Nexus 7 which has many of the same specs, except an S4 Pro at 1.5 Ghz, no microSD slot, and a significantly smaller screen real estate.

So your decision will basically come down to this: if you’re very price sensitive, you want the “stock Android” experience, and a lot more upgrades (faster, too), and you like the screen size of the Nexus 7, then go for that. However, if you don’t mind LG’s UI customizations, want the larger screen, and the slightly faster processor, then you might find it worth it to pay an extra $70 for the LG G Pad 8.3. 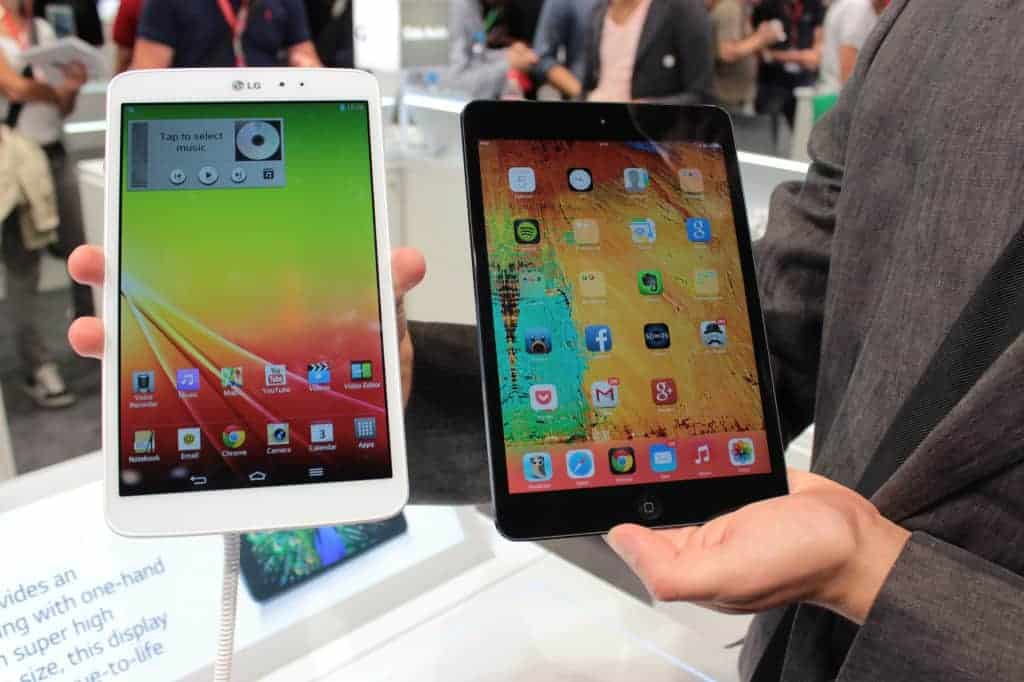 For what it’s worth, I think it’s great that an Android manufacturer managed to squeeze an 8.3″ screen in a form factor with less width than the iPad Mini. I find the iPad Mini a little too wide, but many millions of people seem fine with it, so in that case, they should love the 8.3″ LG G Pad even more, because it offers them more screen real estate, without making it wider.

I’ve been saying before that I think 7″ is starting to become too small for a tablet, and I think Google should’ve already moved away from 7″ with the Nexus 7 this year, and should’ve used something like a 7.5″ or 7.7″ screen on the new Nexus 7. But seeing how rumors point to LG making next year’s Nexus tablet, I believe Google will move to 8″ or even 8.3″ then, and call it Nexus 8, just like they’re moving to 5″ for the Nexus 5 this year.

Until then, it seem LG is leading the way here with larger screens but tiny bezels, with the LG G Pad 8.3, and if you can’t wait until next summer for a larger Nexus tablet, then this one will be available this October. Is the G Pad 8.3 worth this much? Let us know what you think in the comments below.