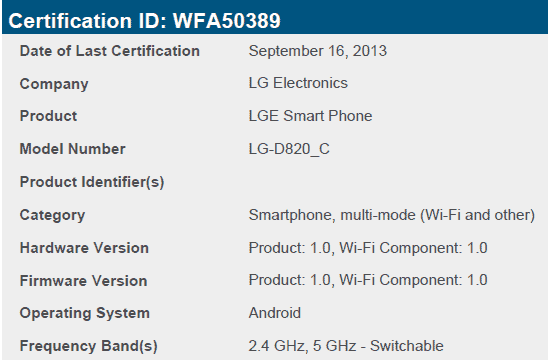 Two unannounced LG devices just got WiFi certification. These are certified as the LG-D820_C and the LG-D820_S. Now looking at the images above, the both seem to have all the same information aside from the model number. So we've got a few theories here. It could be a CDMA and a GSM version. Or maybe a LTE and a HSPA+ version. Or the most likely, two different storage variants. but then again, if it's just a 16GB and 32GB version passing through, wouldn't the model numbers be the same since the internals are the same aside from storage?

The LG D820 is known as the Nexus 5, or at least that's what we think it is. It's been leaked with that number many times already. We're expecting the device to be announced in October with it being available in November. Along with it running Android 4.4 KitKat. Some of the specs we've seen include a 4.96-inch display, with a Snapdragon 800 SoC. Which is great because the Snapdragon 800 is not only powerful, but supports a crap load of LTE bands. Considering the Nexus 4 didn't technically support LTE. This is a good thing. We also expect to see 2GB of RAM, and hopefully 16GB and 32GB models. If not a 64GB model in there somewhere.

There's a rumor floating around that the device could be announced as soon as October 14th along with everything that's in Android 4.4 KitKat. Although that's just a rumor, so we'll treat as one until we get invites from Google. Which should be in the next couple of weeks, since we under a month away from the October 14th supposed event.

Why do you think there are two versions of the D820 getting WiFi certified? If you have any theories, feel free to leave them in the comments below. We'd love to hear them. How many of you are excited for the Nexus 5 and Android 4.4 now? What about the new Nexus 10? Let us know in the comments below.