Wearable technology is a booming market in 2013 with products ranging from the Pebble SmartWatch to Google Glass taking the world by storm. Sony is certainly no stranger to the wearable technology market with three other consumer products under their belt. Several months ago, Sony not only unlocked the bootloader of the current Sony SmartWatch but, also took the time to announce the SmartWatch’s successor, the SmartWatch 2. The SmartWatch 2 is expected to be officially announced within the next 24 hours at IFA. 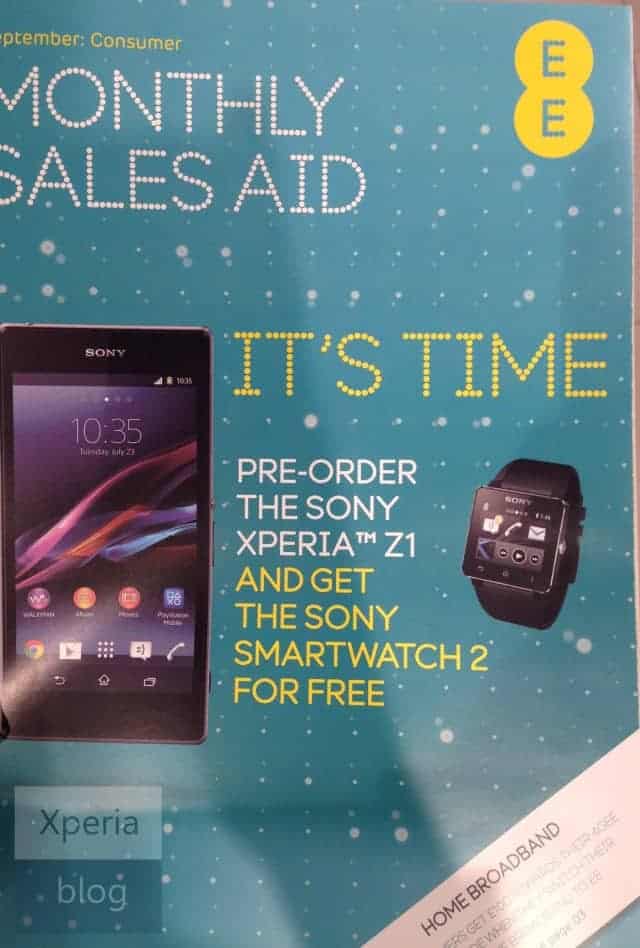 Thanks to a leaked newspaper insert, obtained by the Xperia Blog, we learned that users in select markets who Pre-Order the Sony Xperia Z1 (also known as the Honami) will also be gifted with the latest Sony SmartWatch 2. The leaked newspaper insert clearly contains the UK carrier EE’s branding. We do not know if this promotion is exclusive to the UK or this specific carrier but we do know for sure that this phone is being launched globally.

I personally own a Sony SmartWatch 1 and can say that it is a very useful device for discretely reviewing SMS messages and looking at my phone notifications while my phone is in my pocket or at my desk (distance permitting). I got to spend a few minutes with the Sony SmartWatch 2 a few weeks ago at a conference and I can say that it is a bit larger than Sony’s current SmartWatch 1 and feels a lot better in spite of the added bulk. The addition of the capacitive buttons does increase the bezel size which makes the watch face feel much larger. It is definitely a worthwhile upgrade to those who currently own the older generation of the Sony SmartWatch. The watch feels very well built and like many of Sony’s newer products, it is water-resistant. Sony has also done away with their awful proprietary 4 pin USB connection that was present in the SmartWatch 2 and have moved to a standard MicroUSB.

Unfortunately the device was not running the production software so I was not able to test how it functions. Based on press shots, we know that the software has gotten a complete overhaul and looks stunning.

While we do not have all of the specifications of the SmartWatch 2 but we can confirm the following;

If you are a UK resident who is looking to upgrade their phone, you may want to take a look at your newspaper this weekend for complete details. Feel free to post in the comments section if you notice this in other locations.