When first launched, the Samsung GALAXY Note met with ridicule and nay saying by most tech pundits. The first ever phablet was considered too big to hold and silly to place against the ear. The attacks were most prominent from circles that embraced the iPhone that already regarded any and all smartphone attempts from Samsung with contempt. Fast forward to 2013 and the phablet category is well established, the forefather of the phablet is highly regarded and most tech pundits eagerly await any sign of the GALAXY Note 3. Indeed of the two Samsung flagship smartphones, the GALAXY Note has been the one that I have most anxiously awaited as it is the only one that I can use as a true hand-held computer thanks to the S Pen and WACOM enabled display.

The enhanced photo at the top is most likely the GALAXY Note 3, first sighted over at techkiddy, and the closest in design to the leaked photos of the GALAXY Note 3 glass panels. Both the photo of the phablet and the photos of the glass panels, source: ETrade Supply, feature sharper corners and a smaller bezel than its predecessor, the GALAXY Note 2. This reduction in bezel width, a trend started with the GALAXY Note 2, has allowed Samsung to increase the size of the display in small yet noticeable increments. With each version, this Samsung flagship smartphone has seen marked improvements in the display resolution and PPI or pixels per inch. The display will be Full HD at 5.7 inches in either IPS + LCD or Super AMOLED, the type of display used will vary on the market with some markets having both. Other specs that are swirling around at the rumor mill include; a Samsung Exynos 5420 or Qualcomm Snapdragon 800 CPU (also market dependent), a 13 megapixel rear-facing camera, an impressive 3420 mAh battery powering up Android 4.3 Jelly bean. There are also rumors that the new flagship smartphone will also offer 24-bit/192kHz Music Playback and Shoot 4K video. 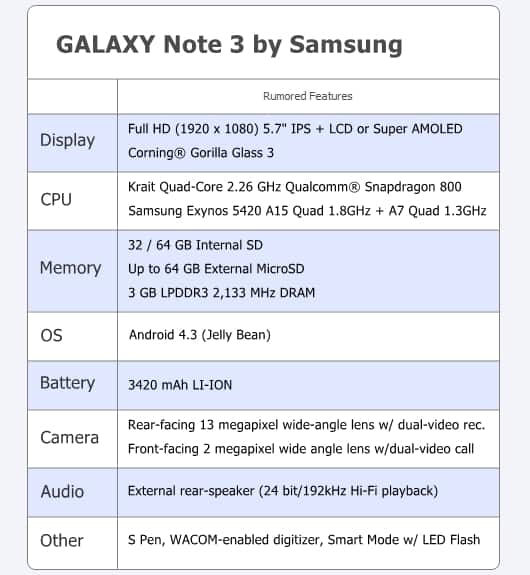