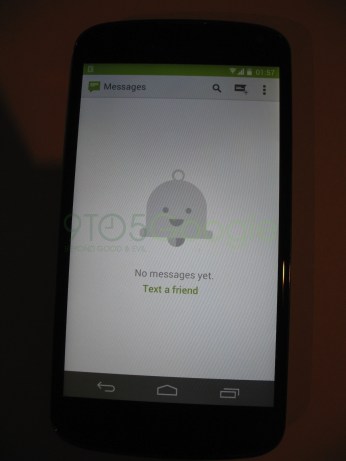 The folks over at 9to5Google have just posted a couple of screenshots of what they believe to be pictures of a redesigned phone and messaging app, probably coming in Android 4.4. We've seen in the past that Google has been moving towards a lighter theme. A good example of that is the Google Play Store and Google Now. We know Android 4.4 is due to be announced in October, and we've already seen what we thought was a leak about new icons. Not really new, but instead of blue, they are now gray. Which you can't really tell in the images in this post, but they do appear to be gray.

It also looks like Google took a hint from Paranoid Android. As in the Messaging app, you'll notice the status bar is green, like the messaging icon, and blue in the Phone app, like the header and bottom of the app. Also in the Messaging app, you'll notice that Mr Jingles is there. He's from the Google+ notification tray. I wonder if you tap him, if he'll jingle like he does on Google+? As 9to5Google states, you can't really see any functionality changes in these screenshots, but I am liking the new design of both apps, which both desperately needed a redesign. 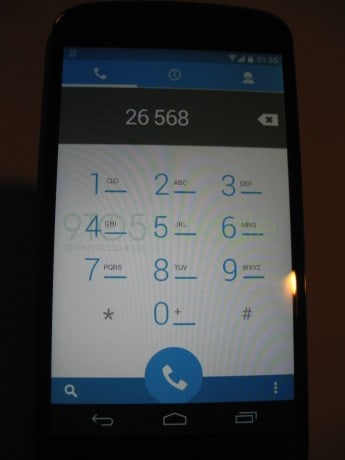 We already know that the Nexus 5 is slated for next month and we've seen it leaked plenty of times already. Right now the rumor is an October 14th announcement, with Android 4.4 becoming available via OTA in November, shortly before the Nexus 5 and new Nexus 10 go on sale. Remember that is a rumor and not yet confirmed.

Things are starting to get really juicy as we get closer and closer to a KitKat release date. We'll be sure to catch all the rumors and leaks for you and of course we'll be covering the Google event when it does actually happen. Hopefully we'll know soon when they plan on announcing what's inside KitKat and the Nexus 5.