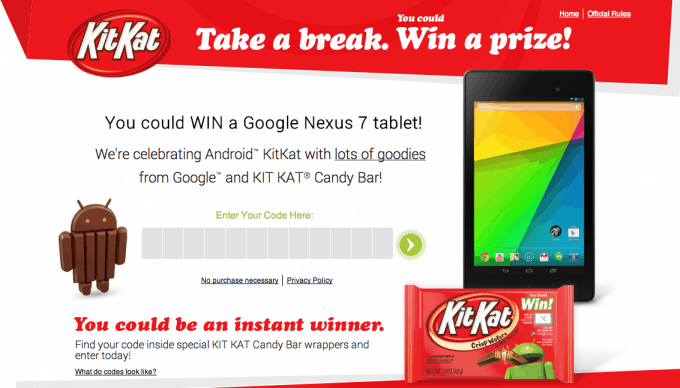 Earlier this week when Google announced Android 4.4 would be KitKat, we were all quite surprised. Especially when news broke later on that KitKat, well Nestle, and Google were in talks at Mobile World Congress about this and were able to keep it a secret until now. Usually that would have leaked out at some point. It's also interesting that Google teamed up with KitKat for this, and the fact that Google is saying no money changed hands in this agreement between the two companies. But anyways. KitKat and Google are doing a pretty big contest with KitKat. Which is now live. And there are plenty of prizes to be won, not to mention chocolate to be bought.

If you buy a specially marked KitKat bar, of course it'll have our favorite Android mascot on the package, if you look inside the wrapper after you're done enjoying your chocolate treat, you can enter that code on KitKat's website and you might win one of three prizes. Here's what Nestle/Hershey's is giving away in conjunction with Google:

So you're going to want to keep an eye out for those specially marked KitKat bars. Although, I want one like what Larry Page got. An Android guy made out of KitKat's. But then I won't know whether I should eat it or save it. That's a lot of chocolate.

I could see KitKat's being sold out around the world now once these special edition KitKat's make their way to store shelves, which should hopefully be very soon. We'll have to wait and see.

How many of you are heading out to the store now and getting a taste of Android 4.4, I mean KitKat? Let us know in the comments below if you win anything from this contest. You can find out more from Hershey's website.