Intel has finally launched its first Atom processors from the revamped Atom architecture. Unfortunately, they’re only unveiling the “tablet chips” this time, which as I mentioned many times before, it’s code-word for “not very efficient”, or not efficient enough for smartphones. A mobile chip is one that works in smartphones, too, not in very specific categories that just happen to use much larger batteries to hide the inefficiency of the chip.

Intel’s new family of Atom “Bay Trail” processors includes several chips going from 1.3-1.5 Ghz for the base clock speed (the real clock speed of the chips), and from 1.8-2.4 Ghz for the Turbo-Boost speed (very short bursts of added performance). I wouldn’t rely too much on the Turbo-Boost speed, though, because you’re never going to say play a game for example at that speed.

Its sole purpose is to give you a few seconds, or minutes at most of increased performance to finish a task, but nothing too long-lasting that needs a lot of performance, because that will be create too much heat inside the device, and it will get throttled back to its back clock speed.

The thing is Turbo-Boost might last enough to do very well in benchmarks, so even though you will very rarely use that kind of performance, benchmarks might come out a little misleading. In the real world you might find phones that are faster with processors that did worse in benchmarks, because of the way Intel’s chips can win these benchmarks.

But enough about the CPU performance. Let’s about about something that is just as important, if not more important seeing how we’re using higher and higher resolutions in our devices: the GPU performance. 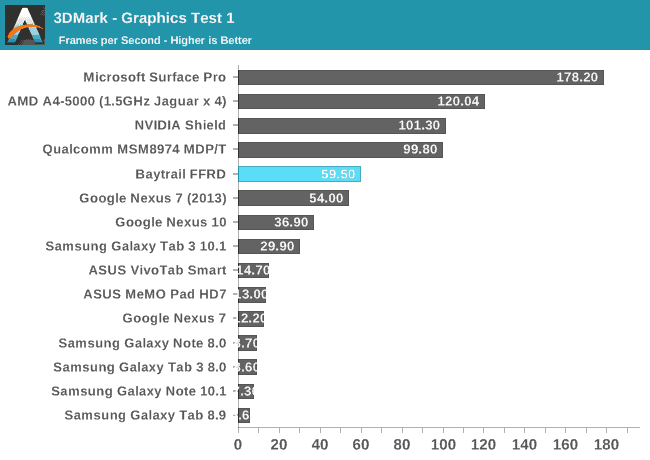 It seems that even though Intel is using an IVB GPU, but with much fewer cores (only 4, instead of 16), that means its GPU performance is actually worse than any of the current ARM SoC’s right now, such as Tegra 4, Snapdragon 800, and even though it’s not here, Samsung’s Exynos 5420 with the new Mali T628 GPU.

While Intel says it’s supporting OpenGL ES 3.0, that seems to be available only for Windows right now, since they already supported that on PC’s before. But on Android devices, it’s not supported yet. It seems they rushed these chips to market before finishing up the drivers for them.

So the question is, is Bay Trail a game changer for Intel? I’d say, no, not really. First off, it’s only a less efficient version of Silvermont that’s made for tablets alone right now (phone version should be available next year). Second, I’m very skeptical about its benchmarks because of the Turbo-Boost capability, and 3rd its GPU is significantly behind everyone else, and my guess it this will be even more obvious when Apple launches its new iPad, and an even more powerful GPU.

The lack of OpenGL ES 3.0 also bothers me, as every new chip should support it now, especially since it’s already built into Android 4.3. Lacking the drivers for it is not really an excuse anymore. I’d say this is progress from Intel, but not nearly enough to actually get ahead of the ARM competition, and even steal market share from them. They have to work a lot harder for that.