HTC has been on the winning side of public opinion ever since launching the HTC One in March of this year.  Since then there had been speculation of HTC’s followup to the One, which came in the form of the HTC One Mini and HTC One Max.  The One Mini rumors came true, and it just recently launched on AT&T exclusively.  The One Max, however, has yet to be officially announced, but we’ve seen plenty of leaks for it over the past few months, and just the past few days have given us more information about HTC’s phablet than we’ve ever had.  This latest leak comes from the famous @EVLeaks on Twitter, and is a confirmation of the logo and name HTC One Max.  You can see from the image above that HTC has decided to brand the One Max a little differently from Verizon’s MAXX phones.  Since the MAXX brand phones are “regular-sized” phones with bigger batteries, HTC wanted to make sure that wasn’t confused with this new model, and as such has made the “Max” portion of the name a subscript.  It’s a sort of funny irony that the largest phone in HTC’s lineup would carry a name using subscript, but that’s how it goes. 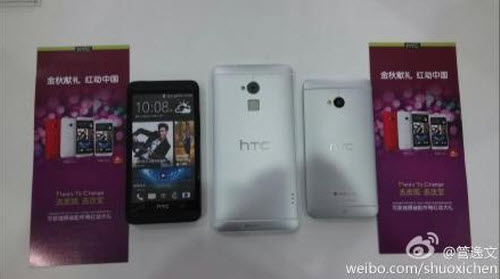 Just yesterday we received some pictures of the HTC One Max side by side with an HTC One, and we were definitely impressed.  The leaked specs for the HTC One Max show that the screen is supposed to be a massive 6.4-inches, dwarfing the newly announced Galaxy Note 3’s 5.7-inch screen.  What’s impressive about this screen size is not necessarily the size itself, which is the same size of Sony’s Xperia Ultra, but that the phone itself doesn’t seem all that much bigger than the HTC One.  Then there’s the mysterious square on the back of the phone below the camera, which is rumored to be a fingerprint reader.  The real question with that is, will they do anything more interesting than Apple has done with the fingerprint reader, or are they content with it just being used to unlock the phone?  We’re expecting an official announcement for the HTC One Max any week now, especially if HTC wants to compete with the Galaxy Note 3 this holiday season.  While there are only rumors of the phone headed to Sprint at the moment, we’re pretty confident that HTC wouldn’t sign an exclusive deal with one of the smaller of the 4 big carriers in the US.  We also expect the handset to be the first of HTC’s to launch with Android 4.3 on board, especially given that HTC has confirmed the Android 4.3 rollout for its flagship phones from both this year and last.  Exciting times abound in HTC land, and phablet lovers will likely be rejoicing when HTC gets around to announcing the One Max for real.