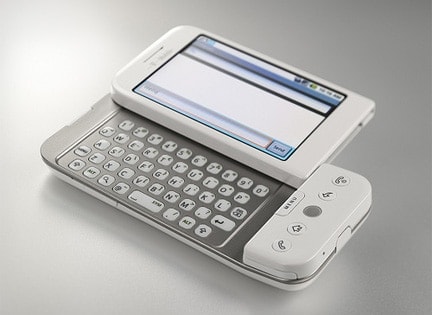 We had been working for months and months with a small team in Building 44 in Mountain View, CA.  We had seen about 9 different versions of the new "Homescreen" for Android and I still wasn't completely certain we had seen the last one.  I remember Fridays being "Donut Day" at the cafe there, and the arcade where I would spend my lunch with a bunch of Android coders playing old school video games – the team was bursting with excitement over what they were building and bringing to the world.

For those of you interested, the specs of the T-Mobile G1 were:

Now think about the specs we see in smartphones today, man has time passed. Now we're seeing 13MP cameras, and quad-core 2.3GHz processors, 3000mAh batteries, and even 6.3-inch displays. It's hard to think of using this phone and it being smaller than the iPhone was.

If it weren't for Google, Android, HTC and T-Mobile for getting the G1 out there and continuing with this project, many of us wouldn't have the jobs we do today. Many of us might be using a Blackberry or an iPhone. Heck, Blackberry might not have just gotten bought out. But we're glad Android happened, and I'm excited to see how it changes in the next 5 years. Imagine what kind of specs we'll see in 2018.

For you're enjoyment, we've included a video of the T-Mobile G1 launch event from 2008.