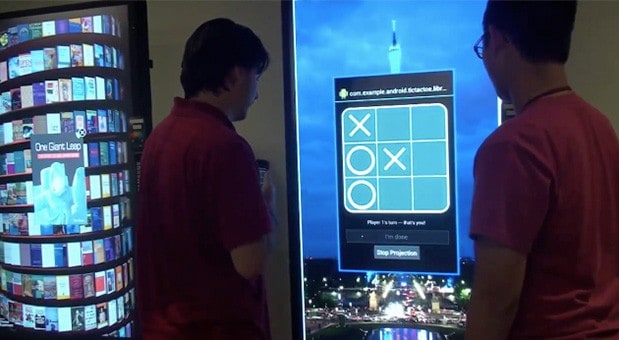 Google seems to always have something new up their sleeve. While they already have the Chromecast which was announced back in July, to throw up websites and media to your big screen. Now some engineers at Google believe they can go one better, with something called Open Project Framework. This is an effort to find a standardized way of mirroring not only content, but also touch inputs on a suitably equipped touchscreen or connected TV. It's also pretty easy to set it up. Open the Open Porject server webpage running on the machine connected to your chosen display, scan the QR code with your smartphone camera, and you're ready to start mirroring apps onto your big screen.

This project opens a world where people can collaborate on content or play multiplayer games without additional hardware or sensors. Right now, Open Project remains a proof-of-concept project for now, but it could turn into a real product soon. There's a video down below from Google showing off how this thing works. It's actually quite cool. I'd love for this to be the "Next Big Thing".

What will the Google engineers come up with next? This week actually marks the 15th birthday of Google. It's hard to imagine what the internet was like 15 years ago. Heck, some of us haven't even been using the internet for 15 years yet. Google has really became a big company in 15 short years. Going from just search, to ads, to just about everything else you can think of. They have their own social network, mobile operating system, desktop operating system, blogging platform. You name it, Google's got it. So what's next for them? Perhaps Open Project!

What are your thoughts on Open Project? Is it something you'd like to see at the next Google I/O? Let us know in the comments down below.