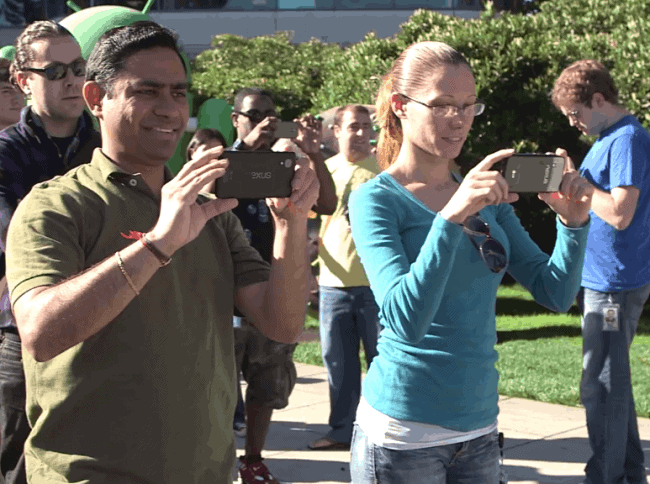 It's never truly to early to talk about the next Nexus device. We knew rumors would be coming soon. Earlier today, as most of you already know, Google and Sundar Pichai announced that the next major version of Android will be named Kit Kat and will be version 4.4.

As usual, all the Googlers came out to take pictures of the new statue on the front lawn of Building 44 at the GooglePlex which is also known as the Android building. If you take a look at the image above, the guy in the green polo has a Nexus device that we haven't seen before. The back of it kinda looks like a shrunken Nexus 7. Especially with the Nexus logo being landscape now instead of portrait. Additionally, it looks bigger than the Nexus 4 being used by the lady standing next to him. So perhaps we will see a 5-inch Nexus device this year?

Now there is a pretty big possibility that this could be a prototype. But I'm sure this is one of the final prototypes, especially if Google is almost ready to unveil Android 4.4 – Kit Kat along with the new Nexus devices. Which currently are rumored to be announced this fall.

Back to the mystery device though, it appears that we can see a LG logo on the back, albeit had to see. Along with the typical FCC information, which usually indicates a non-removable battery. There's also the Nexus logo which we mentioned already in addition to the rather large camera. Perhaps we might be seeing a mixture of what HTC has done with their camera and Motorola's ClearPixel? I'd love to see a 8MP UltraPixel camera, or even more megapixels that are larger. I think the HTC One takes great pics, but the regular lighting pics are kinda not that great, especially compared to the Galaxy S4 and other flagships out there.

As you can see in the picture (a more up close one above) the mystery Nexus phone is next to the Nexus 4, and in the background you can see a guy with a Galaxy Nexus. I think he needs a raise, what about you?