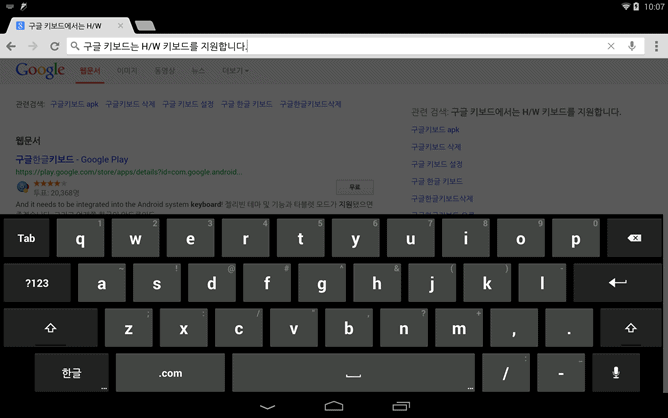 The folks over at Android Police have made a rather interesting discovery. On Friday, Google updated the Korean Keyboard IME in Google Play, which now shows a screenshot which could possibly be taken from Android 4.4 KitKat. Now at first glance, you probably don't notice anything different. However if you look at the status bar, you'll notice the holo-blue is gone, and it's just gray now. There's also a Key Lime Pie icon in the left-hand corner. I'm guessing they haven't updated it to a KitKat icon yet.

If you take a look at the image above, you can see the changes. The debug icon now looks like a slice of Key Lime Pie, instead of just a Jelly Bean. Additionally, the WiFi and battery icons look a tad smaller. It could also be that there is more space between the battery icon and the clock. I have to say though, this looks nice. Although I love the holo-blue color, I'd like to see the gray icons in the status bar.

It's probably important that we mention, this is not confirmed. Mostly just speculation. However, we have heard rumors that we might see an interface refresh with KitKat, which would be nice since the UI has pretty much stayed the same since Ice Cream Sandwich. The only real visual changes I can think of are the toggle switches in settings.

Android Police is also stating that the latest Android test builds are no longer referring to the upcoming Nexus as 'Nexus 4', but as the Nexus 5 now. So things are coming along, and it shouldn't be too much longer before we see Android 4.4 KitKat and the Nexus 5. Not to mention the new Nexus 10, which looks to be made by ASUS this year.

If this is indeed from KitKat, are you going to miss the holo-blue colors in the status bar? Or are you fine with the gray status icons? Let us know in the comments down below.