Before I begin, let me preface this post with the following message : Take this with a grain of salt as not all patents imply a final product will be built. There is no telling if this will be its own product or just something that may influence the final design of Google Glass.

As a Google Glass explorer who constantly lets users test out my Google Glass, I am occasionally bombarded with questions, one question that comes up more often is why doesn’t Google build the Glass into a traditional glasses frame? While many users feel that this would be ideal for those who wear Glasses, so they can replace the lenses with Prescription Lenses, others feel that this may eventually allow Glass to fold up or even adopt a second battery. 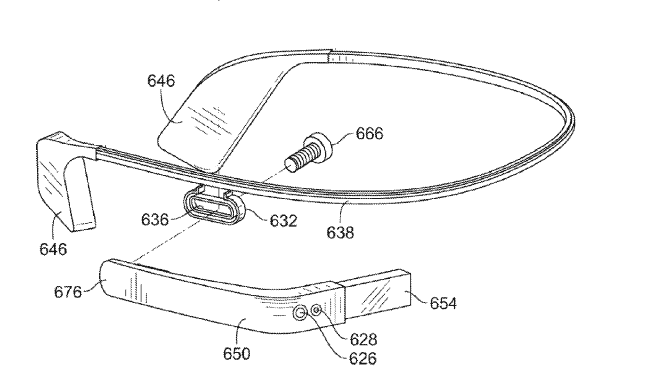 It appears that the fine folks at Mountain View have been listening and based on their latest patent filing (20130235331), they may be playing around with this concept as well as many others. This patent application shows several revealing concept ideas including the possibility of removable frames, moving the screen from the right to the left, a hinge like arm to move the screen angle and even the possibility of (what appears to be) a second battery.

Interestingly enough, the patent application also contains the phrase “The communication link may also be a wireless connection using. e.g. Bluetooth…. IEEE 802.11 (including any IEEE 802.11 revision), Cellular Technology (such as GSM, CDMA, UTMS, EVDO, WiMax or LTE)”.  If this is an indication of a future LTE version of Glass, it would make A LOT of Glass Owners happy.

My initial thought is these images may have been some of the initial Glass prototypes however it is unlikely as the patent application was filed early this morning. It is no surprise that Google is working on a version of Google Glass geared to users of prescription glasses but the sketches in the above patent application may or may not be related to users who wear prescription glasses.

Personally, I like the design of Google Glass as it is. It is very low profile and practically invisible when not in use. As Google Glass has been featured in many fashion shows, there is a small possibility that this may be an option to those who like to accessorize with thick glasses frames as a fashion statement.