Our friends over at Droid Life put together a couple of charts that we are using to show you the comparative specifications for some of the most formidable smartphones on the market today.  Two of the devices, the Galaxy Note 3 and LG G2 were just released in the past couple of days with the Moto X released a couple weeks ago, and while the Galaxy S4 and HTC One have been around a while, they are still worthy opponents.  With all of the leaks posted and multiple articles it can sometimes get confusing as to which device has what, so hopefully this chart will give you a straight side by side comparison of the flagship or mother ships, as I like to call them.

I know you can read the chart, but I just wanted to make few observations (it’s my job, you know) about the facts and figures: There is also a comparison of the Samsung only phones 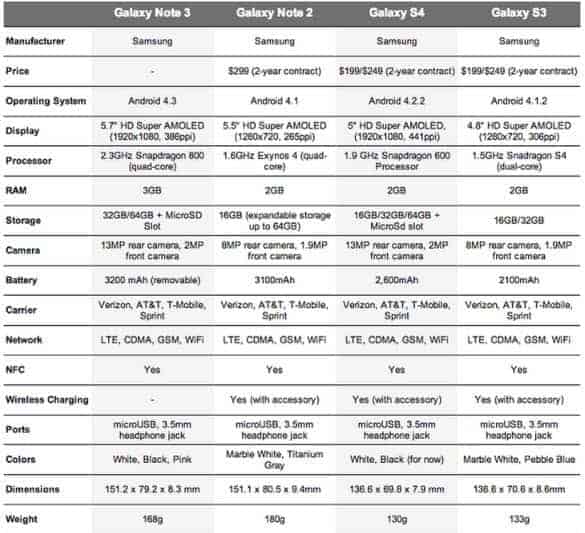 This comparison of the Samsung only phones and this will allow you to decide if it may be worth jumping from your Galaxy S3 to the Galaxy Note 3, or some other combination.

So there you have it – compare, cross-check everything, and hopefully you can make an informed opinion about which smartphone is best for you. Let us know what you decided.