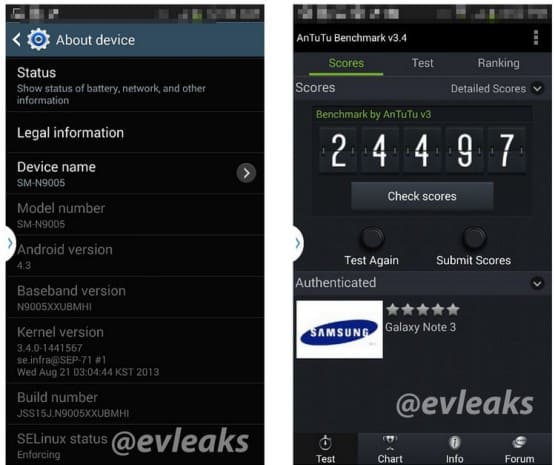 Looks like Samsung is really working on getting everyone hyped about the Galaxy Note 3 that they are set to announce on Wednesday. We've already just about confirmed all of the specs for the Galaxy Note 3. We've even seen the lock screen wallpaper over the weekend. Now our favorite leaker, @evleaks has gotten his hands on the About screen of the Galaxy Note 3 as well as a screenshot of the AnTuTu Benchmark.

Now let's start off with the About Screen. It doesn't tell us a lot. But what it does tell us is that the Galaxy Note 3 is running on Android 4.3, this is the SM-N9005 model which is one of the many we've heard about. Since it's the SM-N9005, it's likely the Snapdragon 800 version, while the SM-N900 will be Exynos 5 Octa. Of course, that's speculation and not confirmed. Considering the Galaxy S4 is the GT-I9500 for the Exynos 5 Octa and GT-I9505 for the Snapdragon 600 version, I'm probably right on target with this speculation.

Now looking at the AnTuTu benchmark, it looks like the Galaxy Note 3 did score about 24k in the benchmarks. @Evleaks is also informing us that we're likely to see the same S Pen functionality in the Galaxy Note 3 that we saw in the Note and Note 2 last year and the year before, respectively. Although we'll definitely see some more features, in addition to the many that were introduced in the Galaxy S4 earlier this year. So stay tuned for a very long announcement about all of the Galaxy Note 3 features. It's definitely going to break some records for the most features.

How many of you are planning to buy the Galaxy Note 3 on launch day?