You remember the rumors of the Galaxy Note 12.2 about a month ago? Well we’ve got some kind of “confirmation” about the device now. The 12-inch tablet had shown up just before Unpacked at IFA earlier this month. However we didn’t see an announcement from Samsung on the Galaxy Note 12.2. So we kind of assumed it wasn’t ready, or they decided to scrap it.

However, the Galaxy Note 12.2 has just visited the Bluetooth SIG, and was assessed on September 16th, so earlier this week. It’s important to keep in mind that this filing doesn’t actually confirm the device, since it could just be a prototype that’s close to release. We see tons of devices hit the Bluetooth SIG, get WiFi Certification and pass through the FCC all the time, but not all of those make it to being announced.

The specs do suggest tha 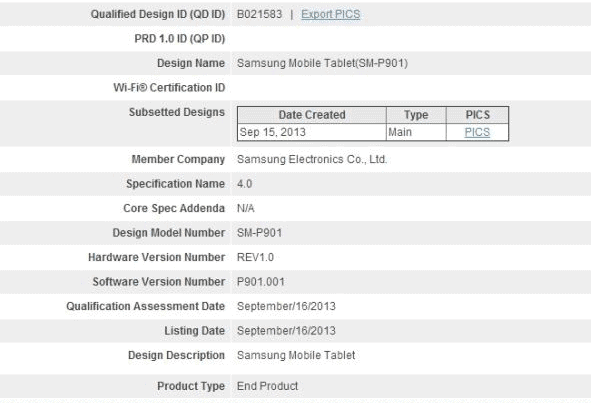 t they are using the same 2560×1600 resolution display from the Galaxy Note 10.1 2014 Edition and the Nexus 10. Which is an amazing display, even if the PPI will be a bit lower on a 12.2-inch display. I just can’t help wondering how well this would sell. Many people are getting away from the 10-inch tablets because they are “too big”, and going for the 7 or 8 inch tablets like the Galaxy Note 8 or the Nexus 7. However, I’d love to check out a 12.2-inch Galaxy Note tablet. I really like the Galaxy Note tablets, with the S Pen. It’s much better than using the S Pen on a 5-inch display. Especially for games, drawing etc., all because of the huge display.

We aren’t sure if or when Samsung will announce this device, but we’ll be sure to watch and see what happens. Hopefully it’ll get updated from Android 4.2 before it gets announced. Since the Galaxy Note 3 and Galaxy Note 10.1 2014 Edition all have Android 4.3, and soon Android 4.4.

How many of you would buy a 12.2-inch Galaxy Note if it had the right specs and pricing? Let us know in the comments below.