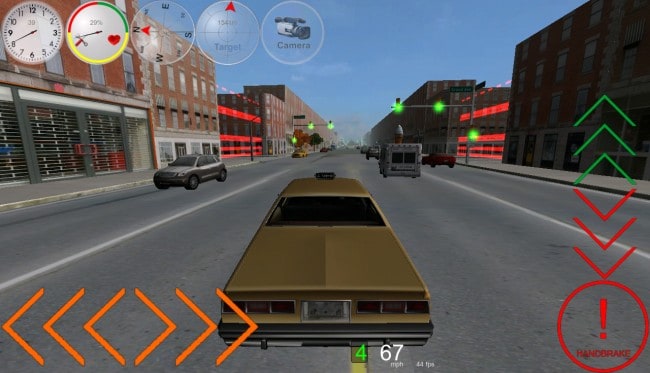 In the last few years, the amount of games and the quality of these games for Android has rocketed. It doesn't feel all that long ago when most games were 2D affairs or blocky 3D games. Now though, thanks to improvements in OpenGL ES and the introduction of Nvidia's PhysX engine and the Tegra line of chips, Android is more powerful than some handheld game consoles. Duty Driver Taxi is a game that hopes to deliver graphical prowess and fun driving gameplay. Much like Crazy Taxi back in the day, this title puts you in charge of a Taxi with missions to complete. Is it worth your time though? Read on to find out!

Description: Duty Driver Taxi puts you behind the wheel of your own Taxi and then sets you different types of mission to complete. Essentially, the game is very much a digital playground of sorts, with the Taxi at the heart of it all. From having to park your taxi properly to driving passengers around the city and avoiding cars, this game has it all. With realistic car physics and a simple yet effective control system, Duty Driver Taxi is a fun game that gives you the ability to drive around in your own Taxi doing what you like. With support for devices running Android 2.0.1 and up, and added Nvidia PhysX support and OpenGL ES 2.0 support for newer devices, this is a great game that almost anyone can pick up and play. 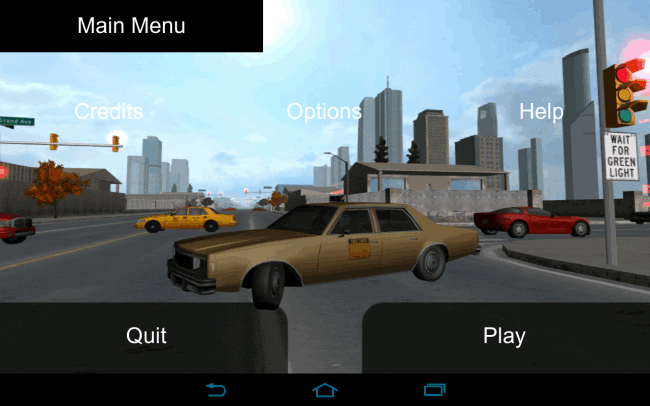 Taking a quick look at the options might be a good idea before you get into the game. 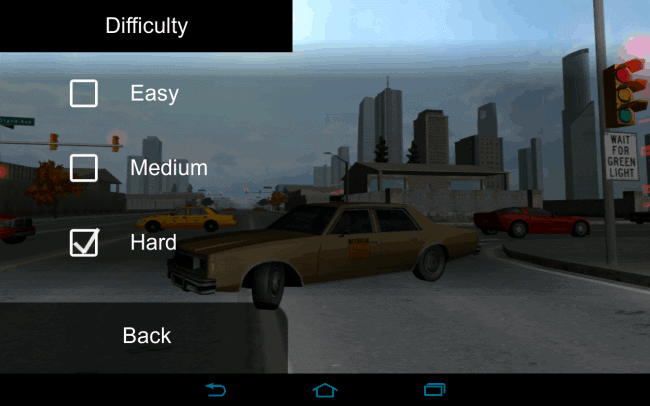 Changing the difficulty is something you might want to do, until you get used to the controls and such. Then there's a whole host of mission types to choose from. 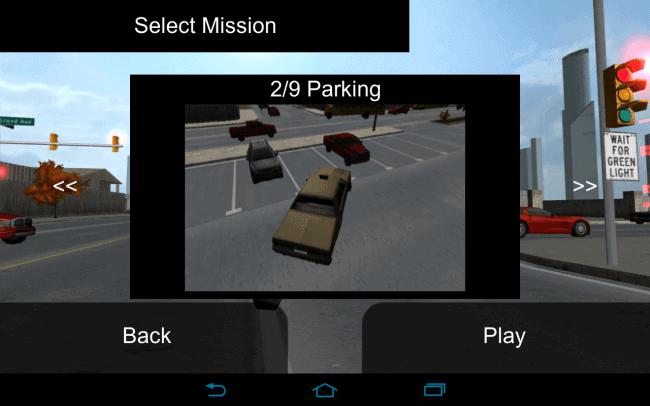 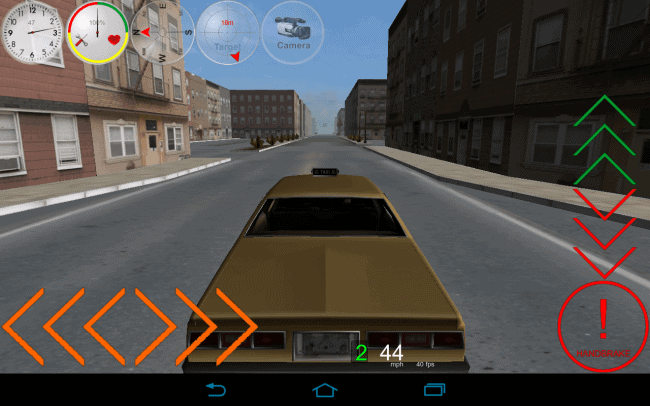 The layout of dials on the display is the same for most game modes. It'll tell you how far away you are from your target and as well as your damage meter. You need to be careful not to take on too much damage as immense damage will cause you to fail your mission. On the left you have the steering controls, touch left to go left and right to go left. The same is true of the up and down for speed, and there's also the handbrake below those pedals. 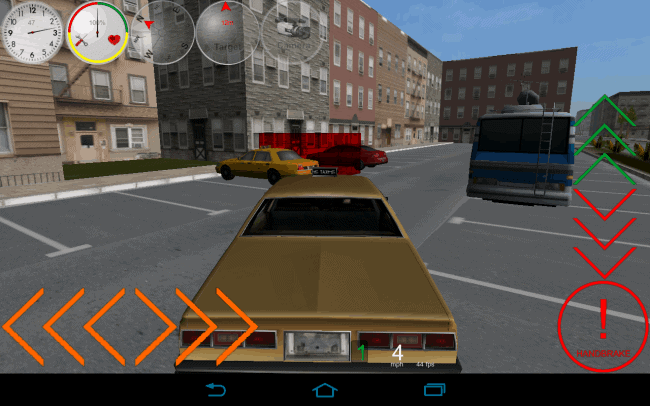 When parking, the box is in red, parking can be quit tricky but also quite satisfying. The stunt missions are also a lot of fun, too. 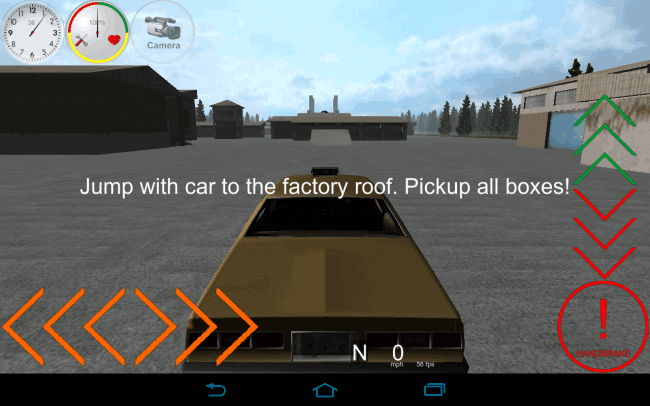 The physics here can be tricky to master and also result in some funny falls. 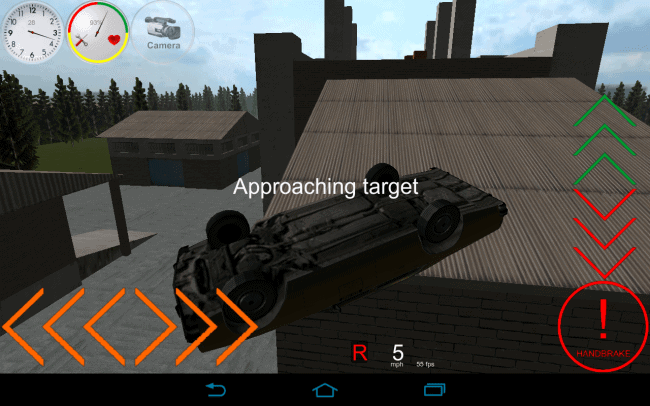 There's a handful of camera angles as well, which is nice to see. Including a novel in-Taxi view, great for racing game lovers. 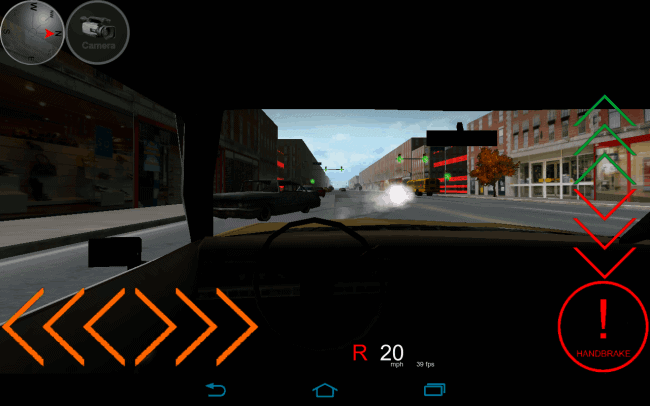 As you can tell, Duty Driver Taxi is not your typical game and there's a lot more to do than the title suggests. Go ahead and try the game to see if you like it, and don't forget that the full version has a full range of missions for each category.

Opinion: When I had a Dreamcast (yes, people did buy those) I absolutely loved Crazy Taxi. Not because there's anything too exciting about a video game where you ferry around people but, because of the arcade driving and the general fun aspect of it. Here, with Duty Driver Taxi, you get a lot of that same amount of fun but, with a lot more flexibility. For one thing, there's more than one game mode, you can even do cool tricks with your Taxi, jumping over other cars. And for another, the physics at play here are quite good. I'd have liked to see collisions have more to them but, overall the driving part of the game is fun. Where Duty Driver Taxi could improve however, is in a little added flare. Improved menus and icon design go a long way to delivering an overall cleaner look.

Conclusion: All-in-all, Duty Driver Taxi is a very good game. There's room for improvement, as there with everything. The menus and icons could do with a redesign but, other than that the aesthetic here is really quite good. At first, the game feels a little stuffy but, spend a few minutes with it and you soon realize that there's a lot of fun to be had while playing this game. From ferrying passengers around to skilfully parking your car, there's a little bit of everything on offer here. With a little more polish, Duty Driver Taxi could become a great game. Right now, it's a solid performer that's a lot of fun. Both casual gamers and fans of racing games can easily pick this up and play.