Regardless of how you feel about Apple and the iPhone, there's no denying that iOS has its own look and feel. A unique look that many of us quite like. Of course, nobody is going to go out and buy an iPhone just because they think iOS 7 looks nice. No, that would be crazy. However, there's now no need to as Espier have put together an iOS 7 launcher that gives your Android device the look and feel of iOS 7 that many of you want. Even if it's not for you, it's great to be able to try something like this and this is what Android is all about: choice.

Description: As you might expect, Espier's iOS 7 launcher does exactly what you think it does. This is yet another homescreen replacement for Android. However, instead of being something like Apex or Nova Launcher, this brings with it the look and feel of iOS7's new look. For many of us, getting away from the stale look of past versions of iOS is why we moved to Android but, iOS 7 is definitely different. Being able to try these things out is great and Espier Launcher allows you to do just that. Thanks to the apps that are on offer from Espier as well, you can quickly pick and choose which elements of iOS 7 you want to replicate. While it's not going to be for everyone, it might just make that swap to this unknown Android phone that little bit easier.

How it Works: To get started, you'll need to download the app from the Play Store, if you find out that you like the app you can pay for the Pro Version. Once you've done that, just hit the Home Key and then select "Espier Launcher iOS 7". After that, you'll be greeted with an iOS-looking home screen. 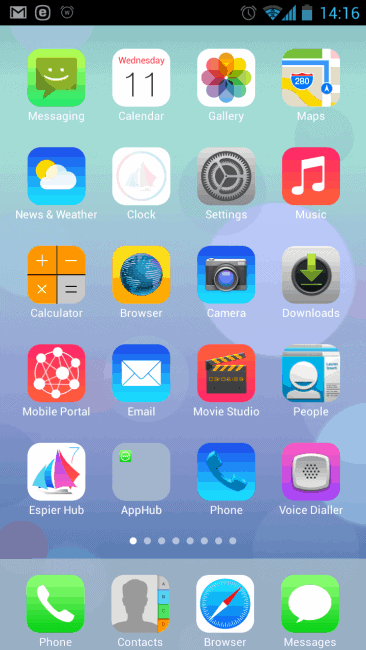 As you can see, the icons still use the Android app icon in some cases, however they're encased in an iOS 7 style bubble. With iOS – like MIUI – there's no app drawer, so all of your apps are on the home screen. They're all in alphabetical order however. Of course, this being an iOS 7 launcher, you can rearrange them like you would on an iPhone. By holding one of the icons down. 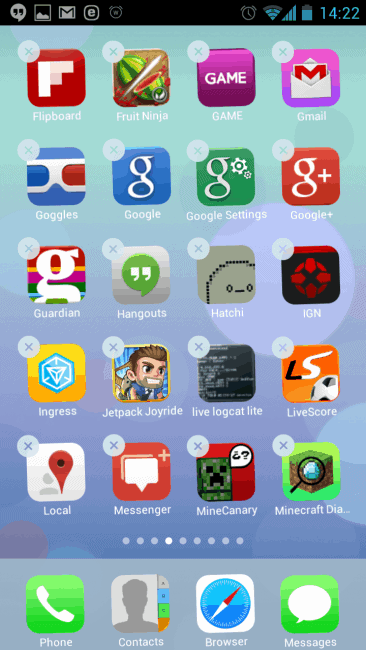 If you find that there are too few icons on your display, you can change the layout of the icons so that you'll end up with a display with lots of icons on it, like this:

You simply drag icons around to have them swap places. You can also place them on top of each other to quickly and easily create a folder. 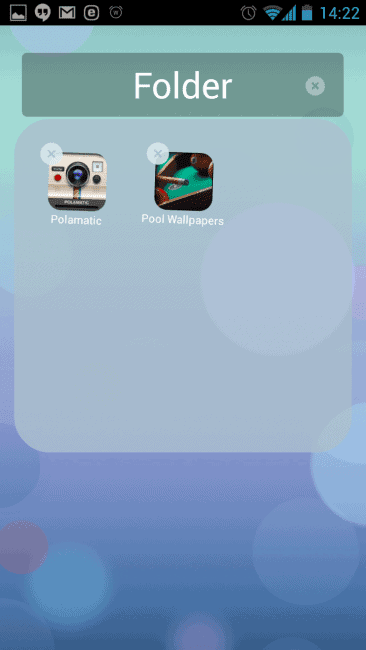 From here, you can also lock and hide icons, which means you can hide an app behind a lock. You can choose whether you want a lock code or a key.

In iOS 7 you can swipe up from the bottom of the screen to get access to recent apps, the same works here. A small tray with your recent apps will appear here: 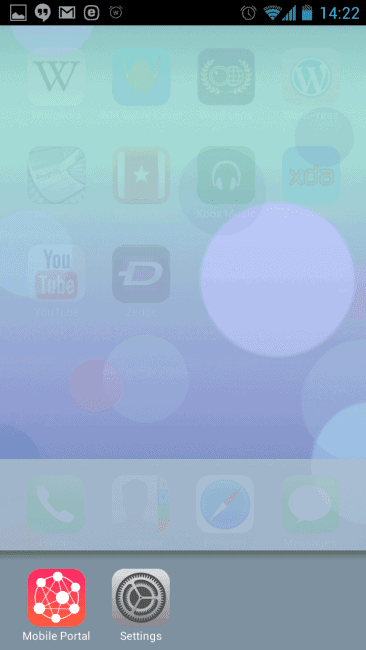 However, the apps in there aren't the same as the multi-tasking menu from Android, just the apps you launched from the iOS 7 Launcher. So if you're going to use this, just be sure to clear all of your apps from the multi-tasking menu first. Overall, the iOS 7 Launcher gives a great and feel like that of iOS 7. That's not all however, as swiping down from the top will reveal the search menu, which acts exactly as it does in iOS 7 and gives you a quick and easy search bar:

In the advanced settings, you can add widget pages once you've paid for the full version. You can add up to 8 widget pages and get a little feel of Android back.

Espier have done a good job here. Even the transitions are very similar.

Opinion: For me, iOS 7 is not a pretty place to be, however, it is something different. Espier's iOS 7 Launcher isn't something for the die-hard Android fan to go after and use, far from it. Rather, it's more for those that enjoy trying out new things and are open to new ways of using their devices. Of course, those coming from an iPhone after years will also like the familiarity that it brings, while also offering something new. One great thing about Espier's launcher is that you don't have to give up widgets. You can pay for the premium version to gain widget support, which is great. However, for the most part, this will make your Android device feel like an iPhone, it's certainly interesting to try out that's for sure.

Conclusion: Espier's iOS 7 Launcher is certainly not for everyone however, those that do what that little bit of iOS 7 in their life, this is the best way to go about it. The look and feel of Apple's new OS has divided opinion all over the Internet but, it's nice to be able to try this sort of thing out for yourself. Sure, this doesn't come close to the actual look and feel of iOS 7 but, it's the closest you're going to get on Android. The launcher feels good and everything looks nice, it's quite quick, too. Espier's iOS 7 Launcher needs a little polish to make it look even better but, right now it looks fine. Definitely something for those looking to get a little iOS in their life, and great for those coming from an iPhone. To get access to some of the more advanced features, you need to pay for some of them. This can be done through the "Mobile Portal" icon on your phone which comes with Espier apps, or you can simply download the Pro Version from the Play Store.