Earlier this week, Google unveiled and started pushing out a new version of Gmail for Android, bringing it to version 4.6. Now we already knew most of what was new in this version. At least what Google had told us. But as always, the folks at Android Police tore down the APK to see what they could find new in this version, and there was actually quite a bit that Google hadn't told us. You can head over to their site for the whole thing, as we don't want to rewrite their post, since they worked so hard on it. But here are some new parts of the new Gmail.

The ads are coming. Yep, we knew they'd make their way to Gmail on Android sooner or later, especially since Google makes over 95% of their revenue from ads. According to this new string of code, shown below, it looks like they will be coming soon.

The gmail team also added a new warning for unsent messages. Which is something I've missed on the mobile version, especially when sending important emails to people and they get stuck in the outbox. If you check out the image down below, you'll see the new message. It's nothing huge, but definitely something that we'll appreciate. 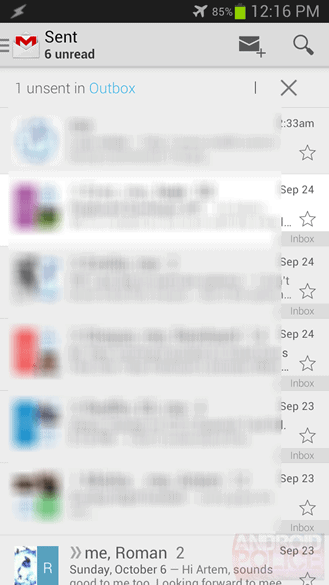 Additionally, Google added the ability to see contact images in the notifications. So instead of seeing that blank contact image, you'll now see the same one you'd see if you open up the app. Which is pretty cool. It's also something I thought should have been added with that last Gmail update.

Don't worry there's plenty more in this update. As we said above, Android Police has the full breakdown, or should we say teardown over on their site. So be sure to check that out. How many of you have already received the update?

Trusted By Millions
Independent, Expert Android News You Can Trust, Since 2010
Publishing More Android Than Anyone Else
14
Today
123
This Week
584
This Month
1258
This Year
111370
All Time