Skip to content
Trusted By Millions
Independent, Expert Android News You Can Trust, Since 2010
Publishing More Android Than Anyone Else
18
Today
18
This Week
488
This Month
6251
This Year
116229
All Time When Google released their latest invention on the world on a quiet July morning, no one knew that it would quickly become one of the most popular devices on the market. The Chromecast instantly sold out on Amazon within hours as well as Best Buy and The Google Play Store. The Chromecast device has pretty much been sold out since with Amazon predicting a November shipping date for some of the later orders.

We have recently received word that the coveted device is back in stock in the Google Play Store and estimated to be shipping within a few days. This is great news for anyone who has been potentially saving their $35.00 for this device.  It appears that Google is putting a strict limit of 3 Chromecasts per order for now.

The Chromecast is a unique little device that allows a user to instantly stream content from YouTube, Google Play Music, Google Play Movies, Netflix and even active browser tabs on chrome to your TV. The device is small enough to hide behind most TV units and draw power from a simple USB port. The affordable price tag made it one of the best impulse buys of the year. The Chromecast is controlled via an Android Device, iOS Device or even a Laptop running a chrome extension. Speaking of iOS, the Chromecast announcement wowed more customers than a recent announcement from our friends in Cupertino. 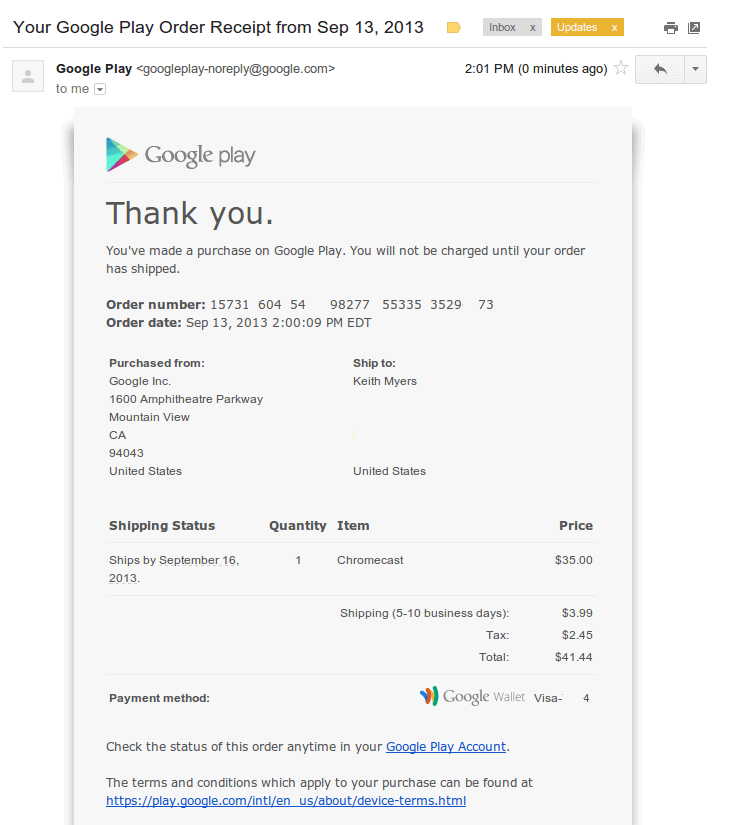 If you are looking to pick up one of these devices (or two or three) then head over to the Google Play Store to pick them up. I finally did. These devices tend to sell out very fast so it is hard to say if they will be available for purchase much longer. We are not sure if Amazon or Best Buy will be replenished as well.