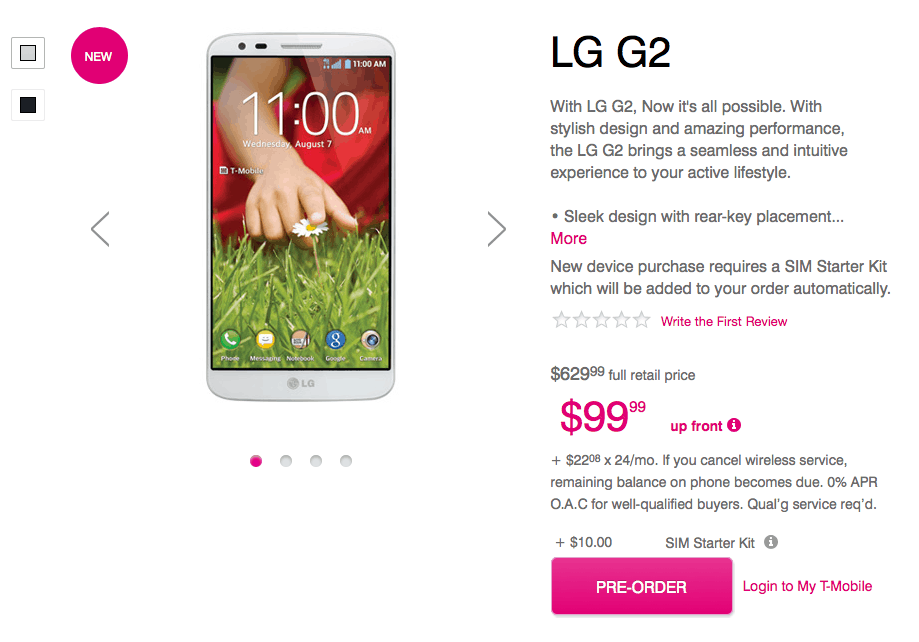 LG's flagship for this year, the LG G2 is going to be available to most carriers in US, which seems to be a big win for LG, and it's already being made available at 3 big ones: AT&T, T-mobile and Verizon. If you go with T-mobile you'll only have to pay $99 for it (2 year contract, obviously), and if you want to go with AT&T and Verizon, you're going to have to pay $100 more ($199.99 with 2 year contract).

The LG G2 is one of the nice surprises from LG this year, considering it's a really competitive device for the high-end, and it's starting to show that LG has matured as a company and is starting to make higher quality devices. I don't think they would've had this opportunity to show the world what they can do, if they wouldn't have been the maker of the Nexus 4, which really helped a lot of people become aware of LG as a company that can make good products.

Google is most likely going to use LG again for the Nexus 5, and then they are also rumored to use them for the next-gen Nexus 7, which I think will become Nexus 8 next year, especially if it's LG the one who's making it. LG has shown it can make devices with extremely thin bezels, and it's why their LG G Pad is 8.3", yet its 8mm less wide than the 7.9" iPad Mini.

That means the Nexus 8 could be 8.3 or even 8.5" with a significantly larger screen real estate, but about the same width as the iPad Mini. Although, I was already thinking the iPad Mini was too wide, and the LG G Pad is pushing it a little, too. So 8" might be ideal if you want most people to be able to grab it from the back with one hand.

All of these partnerships with Google are surely going to benefit LG in both image and know-how – learning how to make Android devices that Android users will love. Who better to have as a mentor than the father of Android itself?