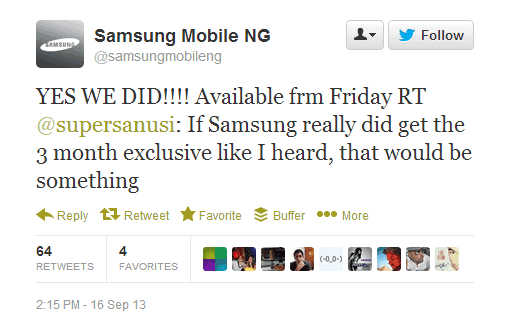 We know Blackberry is really hurting for money, but it looks like Samsung and Blackberry have just struck up an exclusive for BBM. Today, Samsung Mobile Nigeria tweeted that the did get a 3-month exclusive on the service and that it'll be launching on Friday. I'm sure Samsung spent a butt load of cash to get that exclusive though. Which is actually kind of surprising. Why? Doesn't Samsung want to push their own chat app, Chat On? Or maybe they've just given up on that already.

While Samsung Mobile Nigeria has an exclusive on it, I'm not sure that is the thing for the rest of the world. Of course I could be completely wrong. But I still wouldn't be worried. Remember when the Galaxy S3 came out and had Flipboard as an exclusive on there? Yeah someone grabbed the APK and soon it was on just about every Android device out there. Then again, BBM is supposed to be very secure messaging. So maybe they've locked it to Samsung devices somehow. Of course, we'll find out when the app goes live on Friday.

Hopefully we'll get more information later on this week about Blackberry Messenger's Samsung exclusive. Earlier today the app leaked, but it was still beta so it was not working for most people. But it does appear to be almost finished. Which is a great thing. Although I'm not into BBM, I'd still like to try it out and see how many of my old friends are still on there, as well as how badly Blackberry messed up the Holo design guidelines. From the early videos, it doesn't look good.

How many of you are very anxious to get your hands on Blackberry Messenger for Android? Or are you over it and just going to stick with Hangouts, WhatsApp, Line, or the other hundred messaging apps out there?