We’re 3 weeks away from the impending launch of the Android 4.4 KitKat version, and HTC is trying hard to at least get its flagship device, the HTC One, on Android 4.3 before that happens. HTC President Jason Mackenzie promised earlier that both the HTC One and the HTC Droid DNA would get Android 4.3 in September, while the DNA would also get Sense 5.0.

I’ve mentioned before when talking about the HTC One X upgrade, that instead of getting the latest version of Android, it’s getting only Android 4.2 with Sense 5.5. So for some reason (lack of development resources?), HTC seems to be upgrading its older devices with older versions of Android, but with newer versions of Sense. HTC is not doing so well financially these days, so it seems they are giving priority to their own Sense upgrades instead of the core Android upgrades. I suppose this more because of a lack of developers than anything else, but it’s still somewhat disappointing if you care more about latest version of Android. 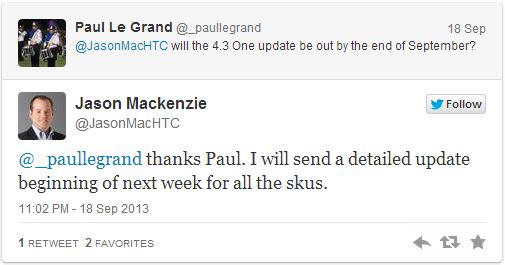 It’s not yet clear if the Droid DNA would get Android 4.3 that soon, though, because it still hasn’t gotten Android 4.2 yet, and so far Verizon has only confirmed Android 4.2 with Sense 5.0. But that doesn’t mean it won’t receive 4.3 eventually, and Mackenzie seems to imply that, too.

It’s too bad most OEM’s are still struggling with Android 4.2, a year ago after Android 4.2 was launched, and just in time for the 2nd version released after that, Android 4.4. It seems that we’ll never get the latest Android version sooner than at least a few months after it was released, and that’s for the latest flagship devices. The previous flagships get it a year later after it’s released, typically, and the lower-end devices are lucky to even get one upgrade, also about a year later, or more.

So far only Nexus devices and the Play Edition devices (one also made by HTC) have proven that they can get Android updates as quickly as iOS devices. Then it stands to reason that if you care about the latest versions of Android, and having all the new features that Google announces, then you’ll need to vote with your wallet and just get a Nexus or a Play Edition device.