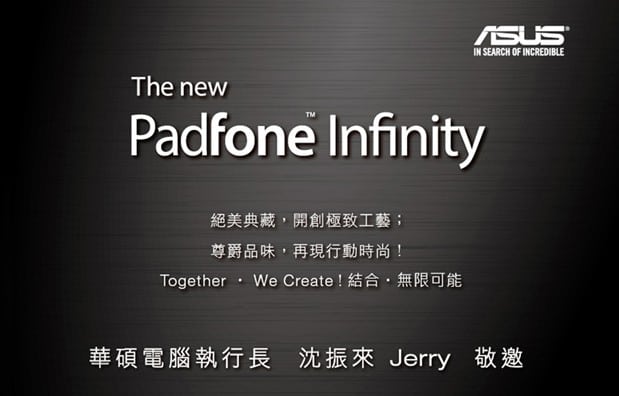 ASUS was one of the very first manufacturers to enjoy success with Android tablets and their Transformer line is still very much alive and kicking. While the new Nexus 7 is off to a flying start in the States, and they've announced a refreshed line of Transformers, the Padfone is still a big thing for ASUS. Of course, for us in the West, the Padfone doesn't excite us all that much. Not because the concept isn't good but, because they rarely – if ever – make it stateside. In fact, the only way to get your hands on a Padfone is to import one, which is often very costly.

The Padfone Infinity is rumored for a refresh and now, ASUS has come out and given us a date when we should expect the new device. Come September 17th, the new Padfone Infinity will be out in the open for all to see. The company is holding an event in Taipei, as usual, which more than likely means that the device won't be coming to the States. So far, there's not much known about the new Padfone Infinity aside from the fact that it's getting a speed boost with a Snapdragon 800. Whether or not anything else is going to change is unclear at this point.

For ASUS, the Padfone is an important line of products, they must be doing well in Asia for them to continually renew the line. Here in the US however, we have a very different wireless model and it's clear that AT&T, Verizon and Co. wouldn't be happy with you having one plan for two devices. Especially when the carriers are all too happy to sell you a tablet and a phone separately. ASUS have uploaded a quick video to YouTube and we'll have more info when the device launches next week.

What about you guys, would you buy something like this if it came to the States?