It was just last week when our friends up in Cupertino announced that the iPhone 5S will be launching with 64 bit support. Apple may not be the only player in town when it comes to adapting the 64 bit architecture on a mobile phone.

Thanks to a photo that was reportedly taken at an Intel Developer Forum, 64bit support is slated as a future enhancement to Android. Although the word “Kit Kat” was not in the photo, if true, the timing may not be a coincidence.

If this photo is legitimate, we may have also gotten our first glimpse of some of the changes that may be appearing in Android 4.4 Kit Kat including NDK Apps Bridging Technology and a Highly Tuned Dalvik Runtime. If these features are correct, they will help speed up the execution of applications.

It is important to note that if Android 4.4 Kit Kat does indeed implement initial support for 64 bit processing, you will need to have a device that can take advantage of the new architecture to run in 64 bit mode. So no, your Nexus 4 (or maybe 5) will not adopt 64 bit support via an Over The Air (OTA) update. 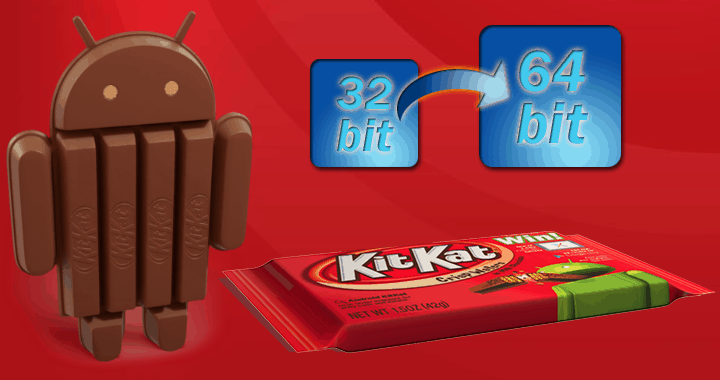 Intel is one of the many SoC manufacturers along with ARM (and all licensees) who are working on their next generation processors, which will have full 64 bit support. These processors will include the ARM Cortex-A53, ARM Cortex-A57 and Intel’s Bay Trail Atom Chips.

It is also important to note that there are currently no significant advantages to having a 64 bit mobile Operating System as the hardware has not evolved to the point to where it needs it. Thanks to some clever marketing, companies are trying to convince users that it can double the performance of the hardware while not providing scientific benchmarks to prove the claim. It has taken Desktop PCs/Laptops over 15 years to adopt the 64 bit architecture. In a few years from now, when tablets and phones are fitted with faster disks and more RAM, than the 64 bit Architecture will truly have an impact.