Alcatel has just announced a bunch of high-end devices, and now they are announcing a premium build tablet, too, made of aluminum, called the Alcatel One Touch Evo 8HD. This seems to be a resurgence of Alcatel, which we’ve almost forgotten it existed in the mobile space. It seems Android has given them the opportunity to rise again, and to make great devices with a quality OS on them (compared to before when they had to make their own proprietary and limited OS).

The Evo 8HD is premium in terms of build materials, considering they’re using aluminum, a material that few use in their devices today. However, it’s not high-end in terms of specs, and it’s also a little too thick (9mm) for a 2013 high-end tablet. Thinness and lightness matters a whole lot more on a tablet than on a smartphone, because that extra weight can tire your hands too quickly if it’s too heavy, and you won’t want to use it too often. Tablets need to be as light as possible (ideal weight around 300g) so you don’t tire too quickly from holding one. 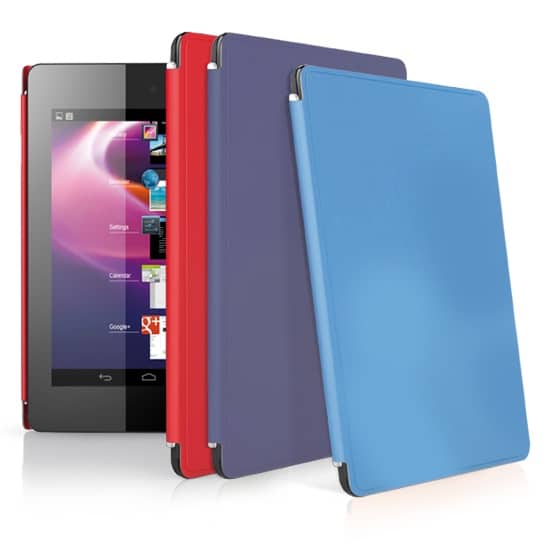 Other specs for the tablet include: 1GB of RAM, and internal storage is only 4GB, support for microSD cards of up to 64 GB, 3-megapixel rear camera, 2MP front camera, and a 4160mAh battery. The battery is a little on the small side for 8″ tablets, but it’s not terribly small either. It’s slightly bigger than what the Nexus 7 has right now. The processor is not mentioned, but it’s most like a quad core 1.2 Ghz Cortex A7.

The Evo 8HD also comes with modular radios, and you can upgrade the tablet to 3G or 4G. It will also have plenty of magnetic colored covers to choose from.