NVIDIA has been making processors and SoCs (system on a chip) for years. Although the NVIDIA Shield is company-branded, they have not yet released a smartphone or tablet with their own name it. They certainly have the capability. We may soon have an NVIDIA branded device, namely a 7-inch tablet that recently passed through Taiwan's NCC. The tablet has been dubbed the Tegra Tab P1640, although that name may change before with an official announcement. 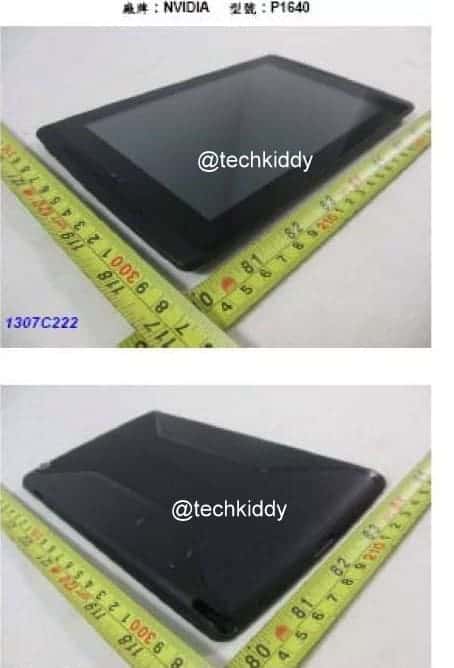 The NCC is Taiwan's equivalent of the Federal Communications Commission in the United States. NVIDIA's tablet looks like a mid-range one, running a Tegra 4 chipset but only having a 1280 x 768 resolution display. Here's the rumored spec rundown:

These images coming from @techkiddy are not very high-resolution. @techkiddy has leaked images to us before, including several blurry photos of the Samsung Galaxy Note III. We have actually heard rumors of two new NVIDIA tablets to be released this fall. One of those rumors included a much better quality image. These images line up with the earlier images that were leaked online. There appears to be a ridge on the back of the device, presumably to store a stylus.

This seems to confirm that NVIDIA is moving into the hardware game. Previous rumors had it that NVIDIA was planning releasing these new tablets in the first quarter of 2014. We may see at least one tablet earlier than that, though. If this tablet is already passing through the NCC for regulatory approval, it could be unveiled at IFA in Berlin. IFA kicks off September 6th, with several companies holding press events on September 4th to get a head start. Samsung is going to announce the Galaxy Note III and the Galaxy Gear smartwatch. HTC should unveil the HTC One Max, and Sony is going to roll out the Honami to us. It's going to be a jam-packed week, and we'll have all of the details right here for you.

Trusted By Millions
Independent, Expert Android News You Can Trust, Since 2010
Publishing More Android Than Anyone Else
3
Today
3
This Week
545
This Month.
545
This Year
110712
All Time