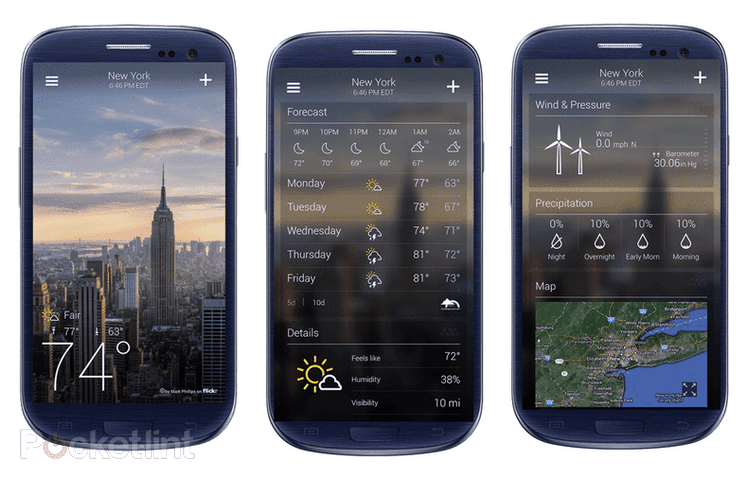 This morning, Yahoo! took the wraps off of their brand new, redesigned, weather app for Android. Yahoo! said with the update that they have brought "gorgeous Flickr photos of locations by weather and by time of day" to the front of the app. Making it look gorgeous. Nice to see them using Flickr for something other than a place to store photos. This might make people think twice about uploading pictures to Flickr now. I know I'd love to see pictures I've taken show up on their new app.

The newly redesigned weather app looks a lot like the iOS version, but they still can't put in a traditional menu key. C'mon Yahoo!. Their iOS version of the app won the Design Award at WWDC back in June, so you know it's a nice looking app.

Now for the weather data. The new app features 10-day forecasts, 24-hour forecasts, chance of precipitation, wind and pressure, moon phases, UV patterns, sunrise and sunset times, and an interactive map. What else do you need? For me that's a bit of overkill as the weather part of Google Now is enough for me.

Some of the other features listed include an interactive radar, satellite, heat and wind maps, sever weather alerts, and humidity sensor, UV index and chance of precipitation. Yahoo! has also added in some widgets that work on both the home and lock screen. which would be very nice on the lock screen, so you can see the weather without unlocking your device. The app also supports landscape viewing now.

The new Yahoo! Weather app is available on Google Play right now and is free, as well as available internationally, so make sure you go and pick it up. I'm pretty sure you won't find another non-holo weather app on the Play Store.

How many of you use a separate app for weather on your Android phone or tablet? Sometimes I use Eye in the Sky as a widget on my homescreen, I think it looks really nice and it just works. Let us know in the comments below which one you use.