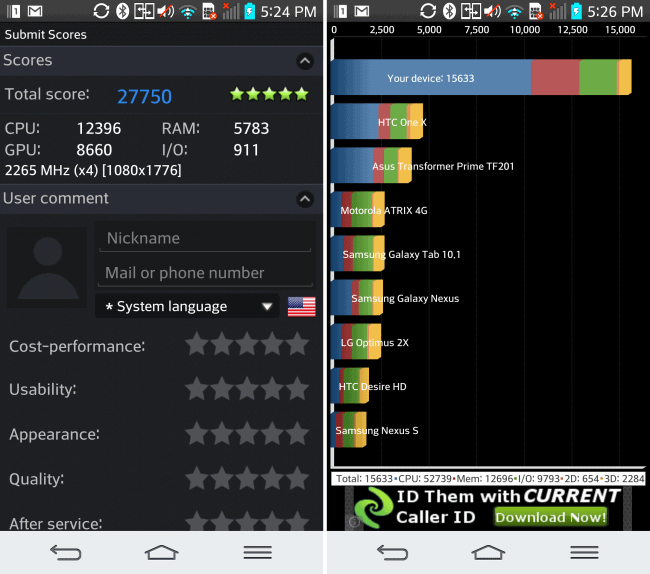 Benchmarks have been a rather controversial topic as of late. Of course, that's due to Samsung supposedly overclocking their GPU and CPU on the Galaxy S4 to make the benchmarks look better. Although I'm fairly sure that other OEMs do that as well. Nevertheless, we do still kind of like seeing benchmarks. We know it doesn't really translate to real-world use but it does tell us how powerful the device truly is. Which we know the G2 is pretty powerful with its Snapdragon 800 processor, which is clocked at 2.3GHz and it's 2GB of RAM which also has Graphic RAM.

The folks over at Droid-Life ran some benchmarks on the device. It looks like they ran AnTuTu and Quadrant (from left to right). Which on AnTuTu it looks like it scored in the 27 thousands. Which is pretty good. But I believe I've seen higher, but those benchmarks could have been faked as well. Quadrant shows it at 15633, which kills many of the other devices it lists, except it all shows devices from 2012 and prior. Like the HTC One X, Transformer Prime, Atrix 4G, and the Galaxy Nexus. I think Quadrant needs to update their devices on their list. I'd like to see it compare to other flagships coming out in 2013, like the HTC One, Galaxy S4, and Moto X. Am I right?

Either way, the G2 is a powerhouse. And while the UX might not be all that good looking, the device is pretty good looking and powerful. Hopefully it won't suffer from the lag issues that the Galaxy S4 did earlier this year. Seeing as it is running on a quad-core 2.3GHz processor, it should be blazing fast, right?

Once we get a review device in hand, we'll be sure to run more benchmarks for everyone that's interested. As for now, we'll have to stick with these. How many of you are impressed by the benchmarks for the LG G2? Did you expect it to score higher? Let us know your thoughts in the comments down below.