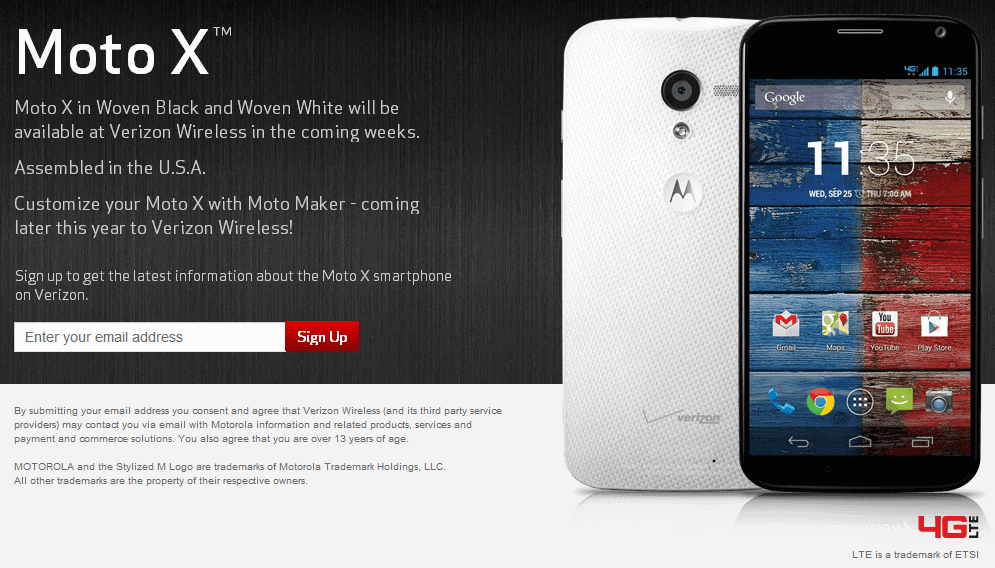 While most carriers have been beating around the bush when it comes to announcing exactly when and if they'll be carrying the Moto X, Verizon has finally come out and just said it.  Well sort of anyway, as the official Verizon Moto X signup page has gone live, and you can now sign up to receive emails straight from Verizon when they have more information about the Moto X and when it will be available.  While we previously had heard the Moto X would be available on August 23rd on all US carriers, Verizon's page makes us think that might not be so.  The signup page specifically says "Moto X in Woven Black and Woven White will be available at Verizon Wireless in the coming weeks," which implies next Friday might be too early for us to see the Moto X on Verizon shelves.  Of course language like this isn't definitive by any means, so until Verizon gives us a specific date don't think too much of it.  Verizon does have a bad habit of releasing phones considerably later than other US carriers however, so don't be surprised if everyone else carries the Moto X before Verizon does.

With that being said, we're pretty excited for the Moto X here at Android Headlines.  It's a fantastic phone that's designed with user experience in mind over pure hardware prowess, and that's what's so fantastic about it, really.  Motorola is even going to be selling the Moto X on the Play Store with all the customizations in tow.  Motorola is going out of its way to make this phone available for everyone, and although the customization might only be available to you in you're on AT&T or ordering it though the Play Store, it's going to be one amazing phone experience no matter how you slice it.  Since the Moto X is running nearly pure stock Android with just a few awesome customizations, you know you're getting a fast device with no garbage bloatware attached.  Head on over to the Verizon Moto X page if you're planning on staying in Big Red Land for the next few years and sign up for more information when it becomes available.  As always we'll likely let you know faster than they will, but it's always good to keep informed straight from the source!