It's been a while since AT&T or Verizon has offered unlimited data to new customers. Furthermore, the only people who have unlimited data on these networks get this privilege because they were grandfathered into the program, and in AT&T's case they are throttled after going over 3GB of mobile data. Verizon appears to be trying to lure users away from these grandfather plans by providing a plan for heavy data users. A Verizon customer service account tweeted about an upcoming plan called Verizon Max, and it's a really enticing option.

Verizon Max is the latest data plan in the game, and from what I can see, it's a pretty enticing offer. The tiered plan offers 6GB of data with no tethering abilities for only $30, or for the really heavy data users, an 8GB plan that includes tethering privileges. Also, users who opt into Verizon Max also get to become a part of Verizon's new Edge program that will be announced in just a few days. Edge is similar to T-Mobiles program for early upgrades, letting customers get several new phones over the course of their two-year contract agreement. Personally I hate waiting forever for my contract to expire and give me the ability to get a new phone far cheaper than full price, so being able to upgrade several times would be a game changer for me. 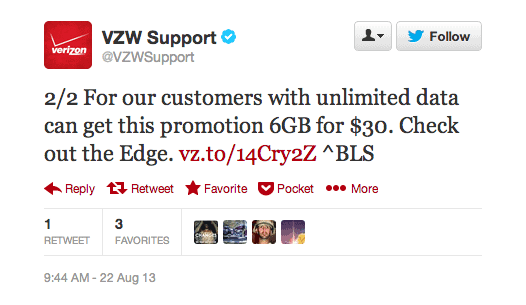 In addition, 6GB for only $30 dollars is unheard of. AT&T's smartphone plan offers only 3GB of data per month, and actually costs $5 more than the rumored Verizon Max 6GB plan. Furthermore, currently AT&T doesn't offer the speedy upgrades with their normal smartphone plan, which is a huge downside to going with one of their contracts. Finally, the 8GB plan is also a very good option for someone who likes to watch lots of video or tethers frequently with a laptop or tablet. For 8GB and tethering privileges, you're not gonna find a price like Verizon's anywhere else on the market.

That being said, switching to Verizon Max will cost you your unlimited data plan. If you still have one, you know how much work it takes to hold onto it after so long. If this plan doesn't look like enough to make you switch, what will it take to make you give up your unlimited? Let me know in the comments.

It's now official, Verizon is trying to get the last of their Unlimited data customers off of their unlimited data plans and onto tiered plans, it's probably not a good idea, although $30/month for 6GB looks like a good deal. Just remember that after the 6GB of data, you're paying $10 for every gigabyte.