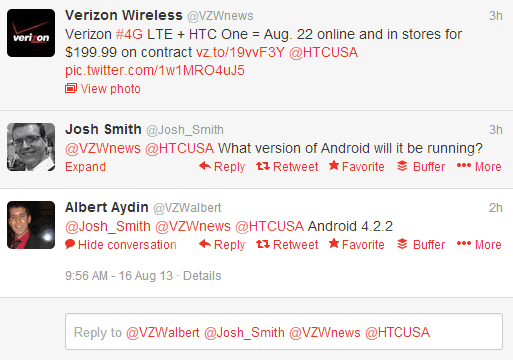 Earlier today, Verizon finally announced when the HTC One will be available. It's coming next week and we're still learning more details on the device. According to Albert Aydin, who is part of the PR team at Verizon, has been answering questions about the HTC One over on Twitter. We've basically learned that the HTC One is coming in the Silver/White color only (at this time) and in 32GB only. Of course, you might remember that AT&T has the exclusive on the 64GB model. But here's the kicker, it's coming with Android 4.2.2.

So why's that a big deal? Well the HTC One on AT&T, T-Mobile, and Sprint are all on Android 4.1.2. While the Verizon one is launching on Android 4.2.2. Right now Android 4.2.2 has begun rolling out to the HTC One in some areas of the world. One has to wonder, if that is why Verizon waited so long to release the HTC One? So they could brag about the fact that their HTC One has 4.2.2 and the others have Android 4.1.2.

The HTC One is running on a 1.7GHz Qualcomm Snapdragon 600, with 2GB of RAM and has an amazing 4.7-inch 1080p display. It also has a 2300mAh battery to keep you running all day long. When I used the HTC One earlier this year, I found that the battery life was pretty good, but then again I had the Sprint version which means I was on Wifi all the time.

We'll be keeping our eyes out to see what else we can find out about the HTC One before it's released next Thursday. At this point, it almost seems like it's too late to launch the HTC One, since it's nearly 6 months old now. That's basically what Sony and T-Mobile did with the Xperia Z earlier this summer. While it's not launching with Android 4.3, it is launching with Android 4.2.2 which is a good thing. Hopefully it'll have an Android 4.3 update soon after launch, but since Android 4.3 just hit AOSP a few weeks ago, we still have quite a while to go.

How many of you are excited that the HTC One has Android 4.2.2 on Verizon?