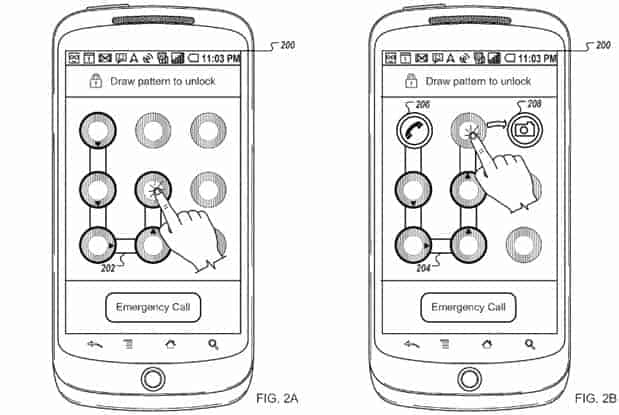 The USPTO has just granted Google a new patent. This one is for those that use the unlock codes for your phone. Many of us don't use them because you can get straight into apps without them. Like swiping over to the Camera, or going straight into Google Now on Android 4.2 and above. Well it looks like those with security measures on their lock screen won't have to live without the app shortcuts anymore.

Has anyone else noticed how the image from the USPTO looks like the Nexus One? I wonder if Google had been working on this for quite a while? Either way, it's definitely something I'm hoping to see make it's debut in Android 5.0 – Key Lime Pie, which is slated to be making its debut this fall with the new Nexus 4 and Nexus 10.

Honestly, I'm a bit shocked that it took Google this long to get a feature like this together and implement it into Android. Maybe it's because they were working on other features that took priority over this? But having the lockscreen shortcuts is one of my favorite parts of Android. I like being able to swipe up for Google Now, swipe over to the camera, etc. Makes taking pictures just that much faster. We don't know for sure that this will be in Key Lime Pie, but we do know Google has a ton of tricks up their sleeve for their Key Lime Pie release, which we believe is still on track for this fall.

How many of our readers out there still use an unlock pattern on their lockscreen? If so, why? Personally I don't use one because I always know where my phone is, but I'm also not as security or privacy conscious as many others out there.