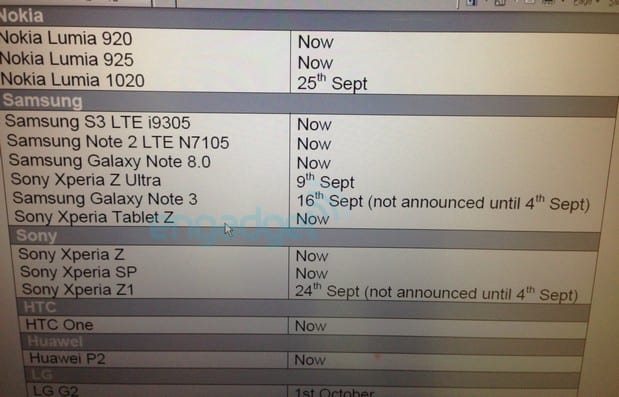 Next week IFA takes place in Berlin. Well it actually doesn't start until next Friday. But on Wednesday, both Samsung and Sony have press events were they are announcing their flagships for the rest of the year and to bring them into 2014. Samsung has already confirmed that they are announcing the Galaxy Note 3 along with their smartwatch the Galaxy Gear. While Sony has been teasing a smartphone of their own. The Xperia "Honami" Z1. Which is said to be the successor to the Xperia Z.

The Galaxy Note 3 is said to be a 5.68-inch device with a Snapdragon 800 processor inside 2GB of RAM and a massive battery. Not to mention Android 4.3 on board. While the Xperia Z1 is said to have a massive camera, it's rumored to be a 20.1MP camera, so we're expecting it to take some really good pictures.

So why are we talking about both of these devices right now? Well a leaked screenshot from Engadget has the release dates of the Galaxy Note 3 and the Xperia Z1, along with a few others. In the screenshot at the top of this article, you'll see that the Xperia Z1 is said to launch on September 24th (not announced until September 4th), while the Galaxy Note 3 is launching on September 16th (not announced until September 4th). While this is no means official or confirmed release dates for either product. It's still rather interesting to see that both devices would be launching in the UK within 3 weeks of the announcement.

What does this mean for the US? Well the Galaxy Note 3 will likely launch around the same time. But as far as the Xperia Z1 is concerned, that could launch at any point. Don't forget, the Xperia Z just launched on T-Mobile about a month ago. So I wouldn't hold my breath for it coming to the US before the end of 2013.

How many of you are excited for the new toys being announced at IFA 2013 next week? Let us know in the comments below.