This past week, 90 percent of the Android news talked about either the Moto X or the G2, and with good reason, they’re the hottest devices just introduced by Motorola and LG respectively and since neither of them is yet on the market, we all keep trying to dig up every bit of news until that day comes.

When the Moto X was announced on August 1st in New York, it was advertised as a phone that will come to every major carrier in the U.S., meaning Verizon, AT&T, Sprint and T-Mobile would carry the phone under the Moto X brand, without any carrier customization (although you’ll definitely find carrier bloatware in all of them). The phone costs $575 off-contract for the 16GB version and $199 on a 2-year contract but the date wasn’t known until now except for a rumor pointing to August 23rd.

Today, Best Buy  posted on their website both the black and the white versions for Verizon, Sprint and AT&T with only T-Mobile missing, all of them are the 16GB variation and with a $199.99 price tag attached to it. Also listed is the off-contract price, marked as $699 which seems really high, however Best Buy is known to charge more for an off-contract price than buying directly from a carrier, this is possibly Best Buy’s biggest profit margin on phones, so if you’re planning on buying it unlocked, I strongly recommend skewing away from Best Buy so you can save a few bucks. 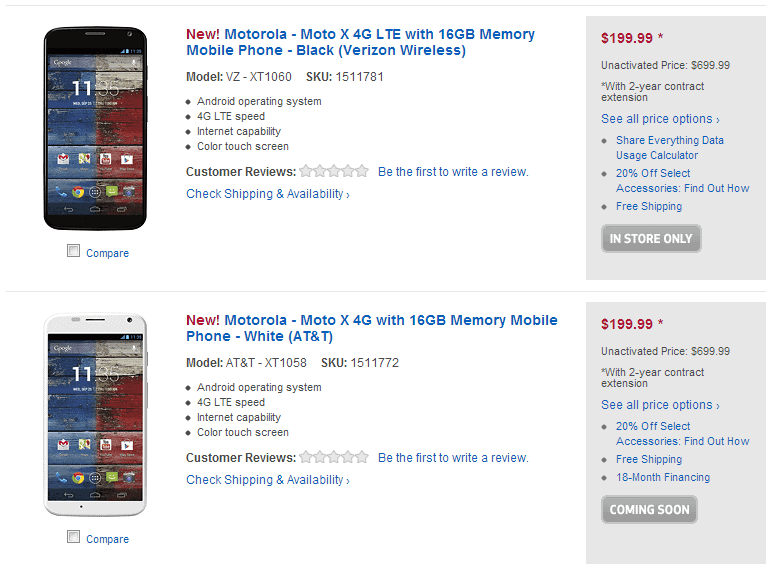 The Sprint version doesn’t specify that it’s the 16Gb version, but we can assume it will since no other carrier is offering the 32GB model except for AT&T through the MotoMaker website.

Unless you want the phone on Verizon or Sprint, I can’t recommend buying the AT&T phone on Best Buy since you would be missing out on the phone customization, which is one of the most attractive features of the Moto X where you can choose between 18 colors for the back cover, 2 for the front and 7 for the accents, on top of that you can pick the 32GB model and even get matching colored SOL headphones. We know that Verizon is getting MotoMaker later this year, Sprint and T-Mobile will probably get it as well but we haven’t heard anything about that yet.

Are you getting the Moto X on a carrier contract? are you getting in unlocked? or you’re just ignoring the phone completely? Let us know in the comments.